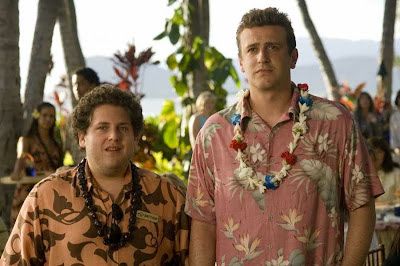 Another enjoyable comedy from the Judd Apatow stable that finds comedy within the common heartache of being dumped from a relationship.

Following on from the success of 40 Year Old Virgin, Knocked Up and Superbad comes Forgetting Sarah Marshall, another comedy from producer Judd Apatow. Forgetting Sarah Marshall this time spotlights another Apatow collaborator, Jason Segal gets the opportunity to move from supporting role to lead actor. Segal, like Seth Rogen in last year’s Knocked Up and Superbad, not only stars this time around but wrote the screenplay and finds Segal talented enough to not only provide us with many great comedy moments but also strikes the right emotional tones and anyone who has found themselves on the receiving end of a break up from a relationship will find much to empathize with.

While Forgetting Sarah Marshall is funny, it does not quite succeed in reaching the levels achieved by last year’s Apatow comedies. Much of this could be due to the relative inexperience of Segal and of director Nicholas Stoller. Stoller is a first time director while this is Segal’s first writing effort and first time as a leading man whereas Rogen and Apatow had more writing and directing experience between them before they made Knocked Up and Superbad. Early scenes in Forgetting Sarah Marshall suffer a little from some uneven editing which moves the scenes along a little too quickly often cutting punchlines short (including some otherwise funny uses of nudity) and skipping back and forth from present day to past events a little erratically but in time the film finds its footing and aside from the occasional scene that’s runs too long, the film itself flows more smoothly.

On the acting front we have little to worry about from Segal. Segal comes across as very natural. He plays the loveable loser role well and his character’s responses to his situation are simultaneously funny and recognizable. At first it may seem that there is not much about his character, Peter that would make us root for him. He’s a nice guy if slobbish and lacking the inner strength to achieve his goals but the more time we spend the more of his positive qualities we see and the more he sees in himself making his ultimate destination in this film all the more emotionally rewarding.

Forgetting Sarah Marshall also benefits from some strong supporting talent. Back are former Apatow collaborators Bill Hader, Paul Rudd and Jonah Hill, all providing funny performance, Hill especially. Russell Brand also makes his Hollywood debut as the hedonistic popstar boyfriend of Peter’s ex, the title character Sarah Marshall. What initially feels like a one-note performance develops becomes one of the strongest comedic performances in the film and Brand impresses. The only criticisms I have in the acting department is with the female characters. Kristen Bell (of TVs Veronica Mars) and Mila Kunis (That 70s Show) do their best with the roles they have as former and potential love interests for Segal, but their roles underwritten considering their importance to the plot. Sarah Marshall (Bell) is written a little too stereotypically needy and career driven in early scenes that when she later begins to doubt her decisions it becomes a little difficult to feel supportive of her while Rachel (Kunis) is unevenly portrayed as being both caring yet even a little crazy at times which puts doubt over whether her character is good for Segal’s until much later.

Overall though, this is a very funny film. Segal proves he has what it takes to write good comedy and support a film and hopefully will see improvements as a writer that will eventually see him as a talent equal to friends Apatow and Rogen. Forgetting Sarah Marshall is not as good as earlier Apatow productions but it’s a worthy addition to their catalogue and will certainly entertain audiences.