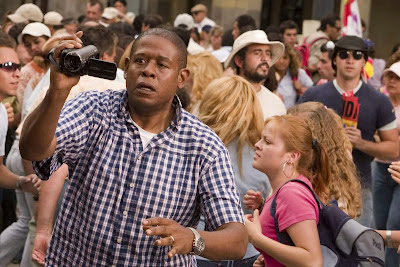 A decent action/thriller based around a neat gimmick, but possessing little that would entertain beyond the first viewing.

The TV series 24 has a lot to answer for. From its massive success and its reinvention of television action dramas, 24 have spawned many imitators both on TV and on the big screen. Vantage Point seems to be the latest in this series and while more entertaining than most, it can’t live up to its influences.

The story revolves an assassination of a president, a bombing and the inevitable conspiracy that these acts reveal. The gimmick is that the scenes are played out again and again, each time from the viewpoint of a different character that witnesses the events and each one possessing information the others don’t that allow audiences to put the pieces together and see the conspiracy. The gimmick itself is fairly successful; starting from the some moment in time with each character, playing out its scenes then the film rewinds back to start and begins again with a different character’s experience. There is entertainment in trying to guess what will be revealed in the next scene although the film and the editing move at such breakneck pace that many questions are actually left unanswered (to probably be revealed on deleted scenes when the film is released on DVD) and some scenes actually contradict others (one perspective sees Secret Service agents open fire on a character yet in later perspectives they have disappeared and someone else does the shooting). It seems that the director was overconfident in his ability to be clever by overlooking some glaring plot holes.

The film still manages to be very entertaining. Action sequences are mostly well done including a great little car chase towards the end and the characters, while having little time to really impress, are fleshed out more from the abilities of the cast than from the script with Forest Whitaker adding warmth to his tourist and Sigourney Weaver adding an almost “seen it all before” weariness to her TV news editor and Dennis Quaid fills the role of action sequence fairly well, even though his near invincibility in some sequences seem at odds with someone of his age. Some actors and characters do suffer in the editing. Matthew Fox is given little to do until the end and little is given to tell us about what his background is and the villains of the film are mostly stereotypical bad guys spouting clichéd dialogue.

Overall, the film is entertaining, if flawed. It has, however, little substance that would warrant repeat viewings and few too many inconsistencies to be truly satisfying. If you miss this at the cinema you’d probably be better served by sticking with 24 at home.