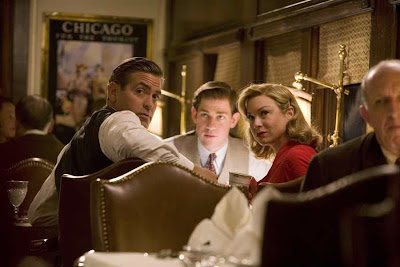 An entertaining comedy thought not quite the screwball classic that actor/director George Clooney was aiming for.

George Clooney is a man in high regard. Often referred to as being an actor in the classic mould who has the charms and talent of old Hollywood stars like Cary Grant and Clark Gable. These comparisons are generally well deserved. Clooney is also held in high regard in relation to his filmmaking based on the critical success of his earlier directorial efforts Confessions of a Dangerous Mind and Good Night and Good Luck. Clooney’s choice for his third film is a screwball comedy. Considering the comparisons made between Clooney, Grant and Gable, this would seem them perfect use of Clooney’s abilities as an actor and his experience with period pieces would seem suited to his skills as a director and he does succeed quite well at using those skills effectively. Clooney does exude charm and further demonstrates a skill for physical comedy and the period detail and atmosphere of the film is top notch however, while Leatherheads is charming and is funny, it’s not funny or charming enough to join the ranks of classic Hollywood comedies such as Bringing Up Baby or The Philidelphia Story.

If there is fault to be found in concern to why the film does not fully achieve its ambitions as a screwball comedy, that fault is to be found in the tone and pacing. The witty banter between Clooney and Zellweger is good but lacks the energy of Grant and Hepburn while the pratfalls that occur during football games portrays a Clooney that sometimes seems at odds with the charmer we see in other scenes. The film also slows down on too many occasions when it should speed up and Clooney tries to add a little too much, serious, commentary on the changes that occurred in professional football during the 1920s when he could be focusing on the comedy that can be mined in those changes.

Overall, this is an entertaining comedy. Clooney is good on screen as usual and Zellweger looks like she was born to appear in films from this period. John Krasinski (from the American version the The Office TV series) manages to hold his own fairly well when working alongside two bigger Hollywood stars and there are some very good sight gags and occasionally witty banter. Not Clooney’s best film to date but entertaining nonetheless.