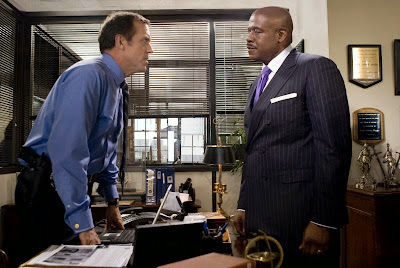 A solid cop drama boosted by a script by acclaimed crime novelist James Ellroy and featuring a strong turn from actor Keanu Reeves.

Street Kings (originally title The Night Watchmen) is not your typical Keanu Reeves film. The opening 10 minutes of this film will convince you of that and that you are seeing a different Keanu Reeves. Opening with a hung-over Reeves, coughing/puking into his toilet, then arriving at an arms deal to sell weapons to Koreans while spitting venomous Racial slurs, getting beaten, then following them to their home and gunning them down in the name of the law. What we see is a crooked cop and a deeply racist one at that. What we also learn is that his actions save two girls who have been kept prisoner a raped. Justice is done but it’s violent and accomplished by breaking the law and covering for it later. It is a powerful, punchy opening and grips you immediately.

It comes as no surprise then to find that this film is written by crime novelist James Ellroy whose prose is famous, and acclaimed, for its punchy dialogue, morally suspect anti-heroes, corruption and for using violence almost as punctuation. The material is also what director David Ayer is well known for. Ayer, the writer behind Training Day who also adapted a James Ellroy story for the film Dark Blue is known for looking at the darker side of law enforcement, condemning corruption but endorsing a more aggressive method of crime fighting as being almost necessary to accomplish real results. So, no new ground covered then? Maybe not, at least not by Ayer or Ellroy. What does feel new is Reeves.

Keanu Reeves, while a popular actor, has not been judged critically as an actor capable of demonstrating much depth in his characters. A little unfair perhaps but Street Kings is one of his strongest roles to date. While Reeves has played cops before (Point Break, Speed) and has even dabbled in Anti-Heroes (Constantine), he’s never been this dark, this complex. Reeves character, Ludlow, is a cop in the Vic Mackey (on TV’s The Shield) mould. A cop who will happily break the law to get his suspect, even without evidence to back him up. Part of a squad of similar cops led by Forest Whitaker, he seems to be unredeemable but as we find, there are lines he won’t cross, lines of honor. When a former partner who is reporting him to Internal Affairs is gunned down in Ludlow’s presence, Ludlow investigates and uncovers evidence that there is more to the attack than believed and that while he might break the laws to apprehend crooks, there are those within his department willing to do use those methods and also profit from it. So, a racist cop, a violent cop, but not one to take a bribe. It’s a fine line to separate Reeves’ character from the villains but a line nonetheless and while it makes Ludlow our anti-hero and we root for him to survive, it doesn’t necessarily excuse his own character flaws. Reeves then manages quite well to tread that line between likeable character and sympathetic one. He manages to convince us that Ludlow is a force for good without actually being good himself.

While Reeves is good and carries the film well, the supporting cast varies in terms of quality. Hugh Laurie appears as an Internal Affairs officer investigating Reeves and others in his team. While good, Laurie merely re-hashes the American accent he utilizes in his role in TV’s House and doesn’t receive enough screen time to really develop his role beyond that of cop that tries to turn Reeves on his team. Chris Evans also appears as young cop looking for some action who gets pulled in by Ludlow to help investigate the death of his old partner and expose the corruption within his team. Evans role is underwritten and his motivations are underdeveloped which is a shame as recent performances (i.e. Sunshine) demonstrate an actor on the rise. Rounding out the remainder of the supporting cast is Forest Whitaker as Ludlow’s boss and suspected mastermind behind events. Whitaker’s turn is solid, using his physicality to intimidate while adding a bit more depth to a character that could have suffered under a different actor.

Overall, this is a strong cop drama. While the ground covered isn’t original for either the director or writer and the plot follows a fairly predictable path to it’s conclusion, it benefits from a strong performance by Reeves and while the film’s writer has written better, his dialogue is better, stronger than most cop dramas manage. Street Kings is still a film worthy of being seen and one with plenty to recommend about it.