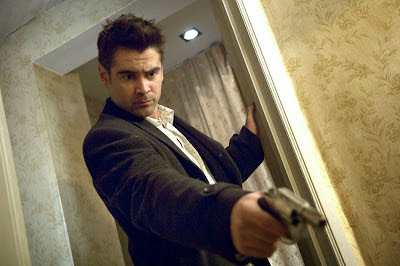 A quick witted, darkly humorous gangster movie that is much more than described and feels like a breath of fresh air in what had become a stale genre.

To dismiss In Bruges as a Gangster Film, a British Gangster Film no less, would be to ignore what is one of the funniest films of 2008 while remaining a touching human drama. The story revolves around two Irish hitmen, wizened old timer Ken (Brendan Gleeson) and inexperienced first timer Ray (Colin Farrell), as they arrive in Bruges to hide out after a hit goes wrong. As they await further orders from their boss back home, they are ordered to stay in Bruges and enjoy the sights. While this suits Ken, the younger Ray struggles with boredom in a strange town he doesn’t know and brands a s***hole and is left to struggle with own demons over what happened during the botched hit. The choice of town, Bruges (it’s in Belgium), is a quiet medieval town filled with historical sights and other cultural places of interest but very little in the way of modern entertainment.

With the drama, contemplations on how to reconcile themselves with God over the things they do and coming to terms (Ray especially) with what occurred recently and with the choice of locale, In Bruges might have otherwise turned out to be a quiet, sedate drama if not for the humor and occasional violence that also occurs. The humorous tone is immediately irreverent, occasionally offensive but delivered in a way that it provokes laughter in a way that may make you feel guilty afterwards. The humor feels very true, very honest as our characters are just human and prone to the same prejudices as we can be. If you would think that comments involving dwarves, the mentally handicapped or stereotypes of Belgians and Americans might offend you then you might want to steer clear of the film, otherwise you can relish in the fact that this is what people are like and if you yourself don’t voice similar remarks then you’d likely know people who do. It helps that our main source of humor lies with the character of Ray and the performance delivered by Colin Farrell.

Farrell has spent recent years developing his role as a Hollywood leading man (Alexander, Phone Booth, SWAT etc…) that you forget he used to be more effective in smaller productions playing average guys (Intermission being the last such instance). Here, in his native accent, he excels as Ray, a young gangster who botches his first job and is stricken with guilt yet is undoubtedly young preferring a night in the pub to a night of “culture” who still finds a childlike fascination in Dwarves (or Midgets as he refers to them) and lacks the tact most develop later in life in regards to voicing their opinions delicately. Farrell possesses a nervous energy, all frowns and furtive glances that makes him believable yet also quite likeable despite his politically incorrect commentary and his reliance on violence when he can’t think of a way to defend himself verbally. We know we shouldn’t like a guy like Ray, or Ken either for that matter, but during the course of the film you grow to care about them. Much of this empathy is also due to Brendan Gleeson’s portrayal of Ken, the experienced hitman looking after Ray who is looking for a quieter life after years of crime. Ken is a man of honor, he feels bad about the people he’s killed but consoles himself some over the fact that his victims were bad men too and their deaths often justifiable. He enjoys the quiet atmosphere on Bruges and while he sometimes struggles to cope with the impatience of Ray, he sees the guilt Ray struggles with himself and feels protective of him.

Between the humor and the occasional moments of violence, we see a believable and touching connection develop between Ken and Ray which serves to make later scenes more emotionally powerful when their boss Harry (Ralph Fiennes delivering a performance somewhat similar to Ben Kingsley’s in Sexy Beast but with a little more humor and heart) arrives in Bruges to clean up Ken and Ray’s mess by looking to kill Ray.

While the finale of the film involves several shoot outs, it manages to maintain a darkly humorous tone throughout and the effectiveness in how Ray and Ken’s relationship has been portrayed earlier in the film, along with the reveal of what went wrong during their last job to disturb Ray as it has and also the relationships Ray and Ken develop with other characters (Ray finding romance with a local dealer, his encounters with a dwarf actor full of his own prejudices) serves to make the violence that occurs during the film’s finale all the more shocking and effecting. There is also a tragic inevitability felt throughout the film that despite its humor, the film couldn’t have ended any other way without undermining the feelings of honesty demonstrated throughout the director’s handling of his subject matter.

Overall, this is a very good film. In Bruges delicately balances drama, humor and violence while demonstrating that there is still life in the British Gangster Film and that Colin Farrell is much more enjoyable when he’s not restricted by the confines of Hollywood.