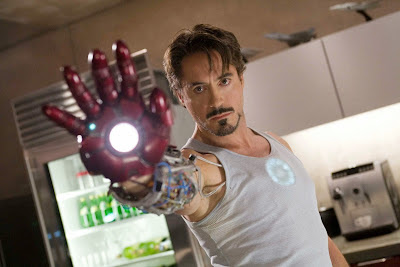 Iron Man kicks off the 2008 summer blockbuster season with plenty of fun and style due, in no small part, to the performance of Robert Downey Jr.

Unlike Batman, Superman and Spider-Man, Iron Man, while a recognizable superhero name, is a superhero without an origin as memorable as those that have seen movie adaptations previously. Not the son of murdered parents, not the last son of another planet, not bitten by radioactive spiders, ask the average filmgoer how Iron Man came to be and most would be stumped. Luckily this is not a problem when it comes to making the film. While maintaining a lot of accuracy to his comic book origins, Iron Man is a hero whose origins are simpler and more relevant to today’s climate. Iron Man is Tony Stark, a wealthy businessman whose company designs weapons. When attacked by a terrorist group using his own weapons who take him hostage to demand he build them more, Stark turns his skills towards building a weapon to free him from his captors. What he creates is a suit of armor and from his experiences realizes the errors of his money-making ways and the innocents harmed by the weapons he has produced. His choice then is to modify and improve his suit and proceed to protect the innocents instead of endanger them.

The use of weapons manufacturing, greedy corporations and terrorism seems even more relevant today than ever before (originally Stark was captured in Vietnam in his 1960s incarnation, now changed to Afghanistan) and add a bit more realism than would normally be expected of the superhero genre movie. Finding an actor then that could play a billionaire inventor who is believably blind to the problems his corporation has caused yet willing to take action when these problems come to life might seem difficult. In this case, director Jon Favreau chooses well in the casting of Robert Downey Jr. Downey Jr is an actor whose life bears some resemblance to that of his character Tony Stark. Initially thriving off his success early in his career, Downey Jr hit bottom after several publicly acknowledged cases of drug and alcohol abuse and several stints in rehab, yet has recently turned his life a career around to find himself back on top again with a new lease on life. This history certainly helps in establishing believability in Downey Jr’s role as Stark. He is also extremely charming and delivers wisecracks and sarcasm with style adding much humor to his character, his journey and even to his relationships.

It also helps that Iron Man has a strong supporting cast, most notable amongst them is Gwyneth Paltrow as Stark’s long suffering assistant Pepper Potts, without whom Stark’s life would fall apart and whose relationship with Stark also includes a very touching romance that neither is completely prepared for. Terrance Howard is solid as Stark’s best friend, Jim Rhodes whose character should be destined for greater things should future installments in the Iron Man movie franchise see light and seems to be in capable hands with Howard. Jeff Bridges is also good as Stark’s business partner and enemy Obadiah Stane, adding some intimidating physicality to the role despite the character’s personality and motivations actually being the least developed of the film and relying too much and stereotypical villain traits. Whilst lacking the humanizing factor, the sympathetic angle on a Spider-Man villain or the moral complexity of a Batman villain, Stark’s enemy Stane and the terrorists he faces in earlier scenes suffer from being too two dimensional in comparison and especially so in comparison to Stark and his friends but Jeff Bridges manages well enough to make an impression regardless thought when the final conflict between himself and Stark comes, it comes in the form of a very impressive CGI battle between Stark as Iron Man and himself in his own armored battle suit.

Iron Man also benefits from some effective CGI as Iron Man himself looks very convincing and the battle scenes within the film rendered very well, no doubt due to machines being easier to render realistically then flesh and also following on from last year’s Transformers movie.

Overall this was a very enjoyable action/superhero film. Downey Jr and Paltrow are great to watch, the action is great and the story is good when compared to many other superhero origin films and future storylines promise to maintain the balance of fun and action following on from an excellent decision made by Tony Stark in the film’s closing press conference scene. A good start to the summer and to the franchise.