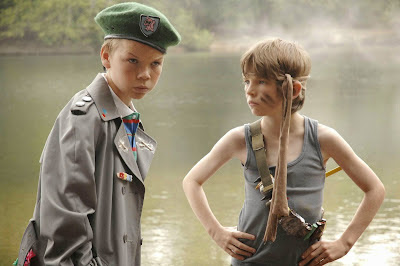 A wonderful little indie-comedy about childhood friendship and the emancipating power of the imagination.

Son of Rambow has been released at the perfect time. Following the latest installment in the Rambo movie series and also following the release of another indie-film about the power of imagination in filmmaking in Be Kind Rewind, Son of Rambow (with it’s endearing, childlike spelling mistake of it’s namesake’s hero) succeeds at beating both films in terms of it’s creativity, heart and ability to entertain.

The film tells of the unlikely friendship that develops between Will Proudfoot (newcomer Bill Milner), a put upon child from a religious family than forbids TV, music and literature from its members, and Lee Carter (Will Poulter), the troublesome boy raised by an uncaring older brother and wanting to make his own film for the BBC. The friendship begins with Lee Carter bullying Will into helping make his film. Will being naïve, unaware of some dangers and ultimately forgiving, accepts and so begins a partnership that develops into a close friendship.

There appears to much in common between the two boys, both missing father figures (Will’s died, Lee’s disappeared after his birth) but this shared history is acknowledged by neither and allows the friendship to develop more realistically for less obvious reasons. Will, having never seen a film before, finds an outlet for his repressed creativity (his imagination largely confined to doodling in his Bible or toilet cubicles) when he sees a pirated copy of Rambo at Lee’s home. The effect this has on Will’s impressionable mind is illustrated in a beautiful and stunning dream sequence where Will saves his dead father while battling scarecrows and flying dogs while imagining himself as Rambo.

Based, in part, on director Garth Jennings’s own childhood experiences, the following scenes as Lee and Will embark on their filmmaking career, with Will as star and stuntman, is filled with great humour (there are many hilarious sight gags) and also great warmth. Jennings’s also captures the look and feel on 1980s England superbly, particularly school life in the 1980s which includes a brilliant Disco scene within the school’s 6th Form. Jennings’s decisions in his casting of unknowns into the roles of Will and Lee also succeed. Will Poulter convinces as the troubled child of a broken home whose bullying nature feels genuine in light of his background while Bill Milner steals the whole film as Will Proudfoot, brimming with childlike enthusiasm beyond what his small frame seems capable of containing.

There are the occasional indulgences that sometimes interrupt the flow of the story, the inclusion of a French exchange student who gets involved in the filmmaking and becomes an obstacle between Will and Lee is given too much screen-time and representatives of the religious order that Will’s family is a part of is sometimes portrayed a too one-sidedly oppressive but this is otherwise a fun and uplifting film and even when the boys find their friendship tested and inevitably realize it’s is time to grow up, it comes naturally and still maintains plenty of hope for their futures without feeling too saccharine.

Overall this is an entertaining comedy which can be enjoyed by children and adults alike.