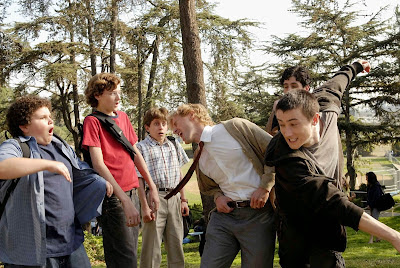 A fun comedy, mostly aimed at younger viewers but featuring a likeable performance from Owen Wilson that will entertain most audiences.

If you are not a fan of Owen Wilson, then it would be doubtful you would be going to see Drillbit Taylor. However, if you are a fan then there is plenty here to satisfy you even though its plot being aimed at younger audiences means it won be quite as entertaining to older audiences as some of the actor’s previous efforts.

After standing up for a kid being bullied on their first day of school, Ryan (Gentile) and Wade (Hartley) also find themselves becoming the focus of the school bully’s attentions. Not confident enough to fight for themselves they look to hire a bodyguard to protect them and ultimately come across Wilson’s Drillbit Taylor, a charming, but homeless army deserter. Playing on his usual loveable loser persona, Wilson’s Drillbit Taylor initially sees the kids as a chance for a quick buck by scamming out of their money with made up life lessons and martial arts training but upon seeing the kid’s suffering firsthand and realizing his own accountability in that suffering, he finds himself genuinely wanting to help. Of course this is made difficult when he is unaccustomed to handling responsibility.

While the plot takes predictable turns and the lessons each character will learn can be guessed right at the start, it is the performances of the cast, Owen Wilson in particular, that make Drillbit Taylor enjoyable. Wilson isn’t adding anything new in his performance here but is still as charming and funny as usual while also offering greeting card sentiment and motivational speeches to the kids in deadpan style. The performances of Troy Gentile and Nate Hartley as Ryan and Wade are also highly watchable with Gentile in particular showing promise for a future career in comedy. Stephen Root puts in an amusing performance as a clueless principal and producer Judd Apatow’s wife Leslie Mann makes an appearance as a flirty English teacher who becomes involved when Wilson’s Drillbit talks his way into a substitute teacher job to be able to protect the boys without revealing his true purpose as a bodyguard. The only weak point in the casting is David Dorfman as an, unnecessary, addition to Ryan and Wade’s circle and manages to do little more than annoy and distract from other characters.

Overall, while not the best comedy of 2008 or of Owen Wilson’s career, there are still plenty of enjoyable moments and performances to make this film worth watching.