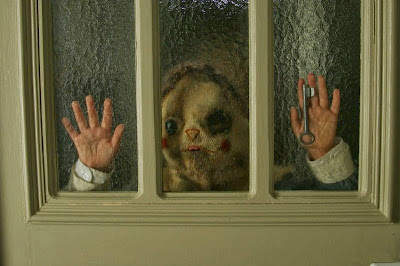 An excellent film and while it qualifies as horror and contains several skin crawling and jump in your seat moments, it is really an absorbing mystery/drama involving the supernatural.

This Spanish horror/drama is supernatural horror made in a classic style. While British and American horror has fallen back on either dealing with excess gore and violence or remaking Asian horror film (which themselves have become stuck in a repetitive rut of Ring rip offs) its good to see that some people still remember how to scare through building the right atmosphere and actually giving us a story and characters that we can become emotionally attached too.

Directed by Juan Bayona and produced by Guillermo Del Toro (Pan's Labyrinth & The Devil's Backbone), The Orphanage is the story of one woman, Laura. Laura, with her husband and son, have moved into an old house that was once an orphanage that Laura once resided at. What soon comes to light is that they are not alone in the home as Laura's son begins talking to imaginary friends, friends with an intimate knowledge of the orphanage and of Laura herself which leads to a mystery within the orphanage's past, of secrets kept, of Laura's own secrets concerning her son and then a mission to find her son when he disappears with his imaginary friends supposedly taunting Laura to find him.

What occurs in the film is an emotionally engaging drama as one woman's search to find her son and her belief that the orphanage is haunted by children from the past who hold her son hostage threatens to leave Laura unhinged and also to alienate her from her husband. You will, however, find yourself believing her fears to be true.

The focus on mood and character makes later scares more effective. Some come during moments of calm (a car accident that made the entire audience jump) while others are the result of scenes filled with building levels of suspense, of dread from slamming doors, creaking floors, glimpses of a child in a sackcloth mask and a seance scene that truly chills you before scaring you outright.

All of this is accomplished without excessive violence or gore and without cheap tricks. Everything is built up carefully, balancing the scares with drama and resulting a truly heart wrenching climax.

I can only hope that audiences can overlook the subtitles and their blood lust and go and see a horror that will have an emotional impact that will stay with you afterwards just as much as the shocks do.