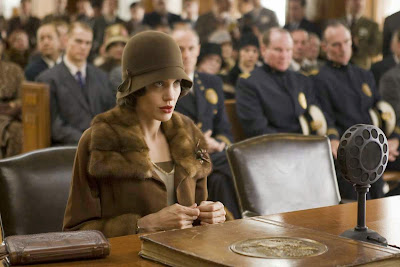 A strong, engrossing drama featuring an impressive performance from Jolie and is another worthy addition to Clint Eastwood’s directorial resume.

While the story of Changeling, based on the true story of Christine Collin’s search for her abducted son in 1928 and the LAPD’s attempts to demonize her when they return the wrong child, is material that certainly brings up thoughts of Oscar nominations, especially given the performance from Angelina Jolie and direction by, frequent Oscar winner, Clint Eastwood; it would be foolish to dismiss Changeling as deliberate Oscar bait. Changeling is, nevertheless, a well made, well acted and engrossing drama.

The first half of Changeling follows a fairly standard course as we get early scenes of Christine Collins (Jolie) playing the hard-working single mother of a little boy Walter and how important he is to her. When she comes home from work one day to find Walter missing, she is, understandably, distraught and waits anxiously for news from the police that begin searching for Walter. The twist in the story comes when, upon being told her son has been found, she is presented with a child who is not Walter but claims to be. With the LAPD already under scrutiny on allegations of corruption, they refuse to acknowledge their mistake and face further embarrassment and proceed to pressure Collins into accepting the boy as her son. When she takes the matter public with the help of a local Pastor (Malkovich) she is deemed unstable by the police and sent into a psychiatric ward.

While the story here and its twists are powerful and gripping, made even more so because the events are true, the telling of the story is also very traditional. Jolie is convincing as the distraught mother, shedding tears when necessary and crying out in anger and frustration over her missing child with conviction as expected while other characters are portrayed as idealistically good, the Pastor, or villainous, Captain Jones of the LAPD (Donovan). Even scenes in the psychiatric ward run towards the familiar with nurses willing to hand out pills and shock treatment without question and the doctors quick to dismiss anything Collins says as a sign of madness although they are still effective in allowing audiences to feel Collins’ frustration at those that are preventing her from finding her son.

Fortunately, at the film’s halfway point, the narrative takes a darker turn and becomes altogether more complex when a boy found on a chicken farm reveals shock shocking, gruesome revelations involving kidnapped children. Changeling turns somewhat darker at this point with the added atmosphere of Noir pictures like L.A. Confidential as the revelations expose the police forces mistakes with Collins and her son whilst also sending the search down a different path and following up on the aftermath of what is revealed. Even when the film moves towards the use of two simultaneous trials, one against the LAPD for their treatment of Collins, the other for the prime suspect in the kidnapping of Collins’ and other people’s children, Changeling still keeps tensions high as we await the ultimate fate of Walter and the effect this ordeal has had and will continue to have on Christine Collins. Whilst the supporting characters and performances still run towards the black and white presentations of good and bad characters with the addition of an honest cop and an unstable suspect, Jolie is given plenty of material to work with and despite frequent reminders from other characters as to how strong a woman Christine Collins is, Jolie is able to convince us it just as well with her performance.

Clint Eastwood demonstrates the skills and experience expected of a director with the experience and award-winning acclaim that he has achieved. While Eastwood’s characterizations involve traditional good or bad stereotypes, the ability to cast talented actors like Angelina Jolie, John Malkovich and Amy Ryan ensure that the characters have more depth from the actor’s performances than the script alone would afford them. Eastwood also shows great ability to capture the feel of 1920s America with much attention to detail and his usual use of a jazz and brass instrument score that feels appropriate for the period. Also, in addition to focusing on the plight of Christine Collins, Eastwood is also able to effectively portray the treatment of women during that period of history in addition to ineptitude and corruption of the LAPD.

Overall, Changeling is very moving, very well made drama. In spite of its adherence to somewhat old fashioned storytelling techniques, it also aids in not only capturing the mood of the 1920s but also some of the feeling of the films of that period. With a decent opening and a strong second half, alongside Jolie’s impressive performance, Changeling is a very good film, worthy of Oscar attention though perhaps not of success.