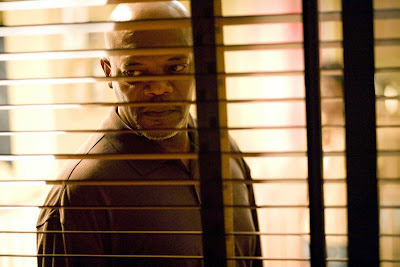 What looks to be an average stalker/crazy neighbor thriller actually succeeds at being far more entertaining thanks to a scenery-chewing performance from Samuel L. Jackson and a strong performance from Patrick Wilson as on of his suffering neighbors.

There was a time in the late 1980s and early 1990s when there was a trend at Hollywood to produce thrillers involving obsessive/psychotics tormenting neighbors, housemates and ex-lovers in films like Pacific Heights, The Hand That Rocks The Cradle and Fatal Attraction. While none of these films are remembered as being masterpieces, they are nevertheless memorable and hold place in many a film audiences list of guilty pleasures. Now, in 2008, we get another addition to this genre that will likely serve a similar purpose for a new audience in Lakeview Terrace.

Set, very much, in present-day Los Angeles in the midst of forest fires and in an economic climate where being or becoming a home-owner is a big undertaking, Chris and Lisa (Patrick Wilson & Kerry Washington) are a recently married couple who’ve just moved to Los Angeles and bought their first home. As if the strains of purchasing a new home and starting a new life are not enough, they soon find that the police officer next door is far from the ideal neighbor they had hoped for. The neighbor, widowed single father and policeman, Abel Turner (Samuel L. Jackson) is a man with strict rules and a very black and white outlook on what he believes is appropriate behavior and his new neighbors being an interracial couple is something he does not condone. Initially bothering his neighbors with more minor acts of intimidation such as subtle hints of his disapproval of their lifestyle in conversations to leaving his security lights on at night and directed open his neighbors windows soon leads to more aggressive actions when Chris and Lisa show that they won’t be intimidated.

As a thriller, while the steady escalation of the threat Abel poses to Chris and Lisa is predictable, the performance of Samuel L. Jackson as Abel succeeds in convincing of his character’s instability. With just a few hints of recent events involving his dead wife to justify his reactions to Chris and Lisa while hinting his anger has always been an obstacle to his relationships with others (as seen by the reactions of his sister and of fellow police officers). Jackson manages to make Abel incredibly menacing yet also maintaining enough charm to keep us interested and also managing to dominate many scenes in a manner that would make the performance memorable in a genre that usually struggles to add anything interesting to what has been seen before.

In addition to Jackson, Lakeview Terrace also features good performances from Patrick Wilson and Kerry Washington as the victimized couple next door. Washington has the slightly less developed role mostly showing her character to be strong and intelligent and able to hold her own in some scenes with Jackson. It is, however, Wilson that gets the bigger role. Wilson’s character faces many conflicts in the film and represents a different perspective on the question of racism and relationships. As the white male in the relationship with his wife, he is the main focus of Abel’s intimidation tactics and Chris refuses to back down as he finds the attitude of Abel to representative of an attitude he has faced from Lisa’s father that he perceives to be based on the color of his skin. Effectively portraying a man frustrated by situations where he feels he cannot win, he also maintains enough decency that his frustrations can be understood even if his actions are not always condoned.

Overall, while building up to a predictable conclusion, the performances of Wilson and Jackson and the effective raising of tensions makes Lakeview Terrace a more enjoyable and much memorable film than it could have been. Fans of Samuel L. Jackson is particular will find many reasons to watch the film again. A three star film the gains and extra point for casting.