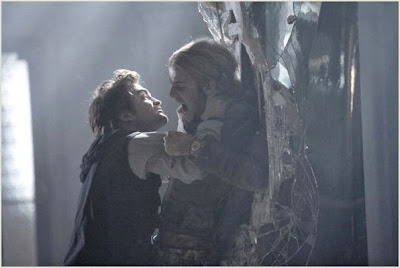 An adaptation of the best-selling novel that offers some interesting twists on the Vampire genre whilst also succeeding in appealing to more than just fans of the novels.

Twilight the novel, and the series of novels spawned from it, have been best sellers particularly amongst its target audience, teenagers. The story, that of a teenage girl falling in love with a mysterious boy at school who she discovers is a Vampire has successfully mixed fantasy and romance and captured an audience on teens attracted to tales of love everlasting. It is not surprising then that, after adaptations of fantasy books for younger crowds have achieved Box Office success (Harry Potter, Narnia etc) that Twilight would soon receive its own cinematic adaptation.

Twilight the film is a largely faithful adaptation of the novel, helped by the involvement of the novel’s author, Stephanie Meyer, and directed by Catherine Hardwicke, a director already making a name for herself with intelligent teen dramas like Thirteen and Lords of Dogtown. However, rather than focus so heavily upon the romantic elements that it feel excessive, Hardwicke has shown enough restraint to keep much of the film grounded in character. The character of Bella Swan (Stewart) feels genuine rather than a stereotypical teen. Her story, of separated parents and having to relocate to a new town and find new friends might not be original but the character’s reactions feel natural, mature. Feeling something of an outsider, even amongst those that accept her, is something she soon discovers she shares with Edward (Pattinson), one of a family of teens that keep to themselves and shun interaction with others in town. What initially begins as a prickly relationship (Edward wanting little to do with Bella but unable to stop staring at her) begins to evolve when Edward saves Bella from a swerving vehicle and revealing hints of his true nature to Bella. Unable to leave the mystery alone, Bella persists to follow Edward until the truth about him and his family is revealed that they are Vampires.

Wisely playing down the stereotypical elements of Vampire lore (no fangs, coffins etc… They can come out in the day but avoid direct sunlight) helps with the believability of the relationship between Bella and Edward. His life being one made more difficult by his nature, being unable to forge friendships due to his not aging and the reminder that his kind generally feed of Bella’s (though Edward and his family are one that refuses to feed on humans). Playing on the reluctance of both character’s desires to keep their feelings guarded in this new town, Hardwicke allows the characters to get to know each other gradually. Edward gets to show Bella his world a step at a time and Bella gets to show Edward a normal life in return. This slow approach feels somewhat refreshing and helps make the relationship more appealing to adult audiences and the performances of both Kristen Stewart and Robert Pattinson as Bella and Edward are suitably impressive.

Twilight does however suffer slightly towards the end. The build up throughout the film involving a second group of Vampires in town that have been attacking innocents is left too late to be resolved a decent matter leaving the film’s climax feeling very rushed as one Vampire, upon discovering Bella and her relationship to Edward seeks to hunt her as a prize. With so much of the film’s strengths lying in its gradual development of character, this direction feels like something from another film altogether and the other group of Vampires receive very little development. However, despite this and despite the occasional moment where teenage fantasy overwhelms the relationship between Bella and Edward (having Edward, and the Vampires of this series shine like diamonds in the sunlight is a step too far), Twilight still manages to resolve many of its storylines with maturity and manages to feel like a complete story rather than a deliberate set up for a franchise (though the potential for sequels is there).

Overall, despite a rushed ending and the occasional pandering to its teenage audience, Twilight is an enjoyable fantasy film. It offers enough maturity in its director’s handling of the subject matter and in the performances of Stewart and Pattinson that adults and teens alike should have much to enjoy.