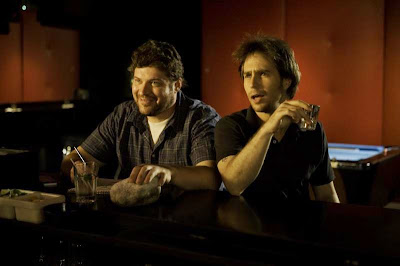 A very dark and funny comedy from the writer of Fight Club that may lack that film’s visual flair and its intensity but certainly maintains the writer’s dark wit and inventiveness.

Nine years after the release of Fight Club, based on the novel by Chuck Palahniuk, we finally get to see another adaptation of the author’s work. While Fight Club only achieved moderate box-office success and received a lot of criticism for its violence and tone, it was nevertheless a cult success building up a faithful following and receiving positive reviews from many critics. In the aftermath, many of the author’s works were prepared for film adaptations but none were ever able to get into production and see release until now. Choke, while based on one of Palahniuk’s later and less intense novels, is still a successful adaptation and certainly an entertaining one.

Sam Rockwell stars as Victor, a college drop-out and sex addict who, through conning people out of money by faking choking attacks in restaurants and then milking his rescuers for money to help pay for the medical fees of his dying mother (Huston) who was once an activist dragging Victor from town to town as a child. Victor is a fairly unlikable character; he cares little for the women he sleeps with, feels no guilt for the kindness of his ‘rescuers’ that he exploits, and feels spite towards his mother whose medical fees keep him working yet she never recognizes him anymore and speak disapprovingly of the choices he has made, choices me has made to support her. Like Ed Norton in Fight Club, Sam Rockwell narrates as well as stars in Choke and like with Palahniuk’s other protagonists, his perspective is one of cynicism towards society.

Things begin to change for Victor however when his mother gets a new doctor in the form of Paige (MacDonald) whose resistance to his advancements to sleep with her and her general kindness towards him and his mother make him wonder whether he could like someone for once. When Victor also learns that his mother has lied to him for years over the identity of his father and is then presented with possibilities that his actual father may have ‘Holy’ ties, he begins to question his identity and his ways. Victor’s life, his sex addiction, his second job as a historical tour guide where everyone must stay in character, the other patients at his mother’s care facility and the revelations over Victor’s possible parentage is source for a lot of dark humor in Choke and it is this humor that makes the film so enjoyable especially given Rockwell’s deadpan, weary performance. In addition to the humor and the entertaining twists and turns of the plot, the film and Victor also give many insights into the nature of people, especially those prone to similar acts as himself and makes commentary on the meaning of good and kindness even in a world that has so much despair and meaningless relationships.

More die-hard fans, purists, of Palahniuk’s novel might criticize the changes made to the ending of Victor’s story in this adaptation and the changes are somewhat disappointing, leaning towards a safer, almost happier ending, but considering some of the novel’s themes and acts, that this adaptation stays faithful so much of it should hopefully satisfy most fans while entertaining audiences unfamiliar with the novel. Rockwell is perfect casting for the role of Victor and is well supported by Angelica Huston as his activist/now-dying mother, a sweet and endearing turn from Kelly MacDonald as Dr. Paige Braddock and a somewhat loveable loser in his best friend Denny, played by Brad William Henke.