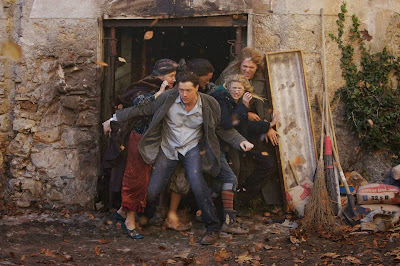 A fairly entertaining family adventure that has enough moments of magic to enjoy even though it does not quite live up to the potential of its premise.

Based on the novel by Cornelia Funke, Inkheart bears many of the traits of classic storybook style adventures: magic, adventure, romance, a heroic lead, a dastardly villain and even a storybook style narrator during the opening who sets the scene for this film about Silver-tongues and their ability to bring books to life by reading them aloud. Leaping ahead 12 years, we meet Mo (Fraser) and his daughter Meggie (Bennet), two avid fans and collectors of rare books on another European trip. However, Mo has another reason for his book hunts, one book in particular he seeks and this book, Inkheart, reveals the nature of his gift as a Silver-tongue to his daughter as the characters he freed, unwittingly, from the book 9 years earlier catch up to him with mixed motives. One, a fire breathing performance artist named Dustfinger (Bettany) just wants to return to the book and to his family, others like the thug Capricorn (Andy Serkis) want to use Mo to grant themselves riches and power in the real world.

So far, so good. With the story set up and our characters in motion, Inkheart is set for high adventure however, despite some very entertaining moments, particularly at the film’s climax, Inkheart only occasionally lives up to the potential it has. While Mo can bring characters to life and out of the books, there is a price that involves someone from the real world going into the book to take their place. As such, this somewhat limits the greats that the film could achieve as Mo resists using books to help him out of trouble as much as possible. When he does submit (such as bringing forth the tornado from The Wizard of Oz) then the scenes become more interesting (and fleeting shots of characters landing into novels like Arabian Nights are fun, if brief) and glimpses of other escaped characters (a Minotaur, flying monkeys and the crocodile from Peter Pan) seen in Capricorn’s dungeons hint at the possibilities that are being avoided.

Still, Inkheart, in spite of its self-imposed limitations, generally entertains. Brendan Fraser is a likeable hero (once again employing the kind of role seen twice already in 2008 with The Mummy: Tomb of the Dragon Emperor and Journey to the Center of the Earth) and Eliza Bennet is incredibly charming as his highly intelligent and strong willed daughter (though perhaps is too much of both for a character that is, supposedly, 12 years old!). Paul Bettany is enjoyable as Dustfinger, the character desperate to get home who constantly tries to fight the selfish characteristics given to him by his writer, Jim Broadbent is also a joy to watch as the author of Inkheart who marvels at his creations come to life even when they threaten to harm him. Andy Serkis seems to enjoy playing a dastardly villain fitting to a literary stereotype and has several British character actors filling out the roles of his henchmen. Helen Mirren however is somewhat irritating as the high and mighty, no time for adventure, Aunt of Mo and Meggie but is fortunately not too intrusive in the scenes in which she appears.

Overall, Inkheart is certainly a fun, family film and makes a decent case for the adventures to be found in books (though of course the irony is that it takes a film to do this). Some entertaining moments and some fun casting means that the film is still quite enjoyable even though you kind of wish its main characters would have opened a few more books and read aloud.