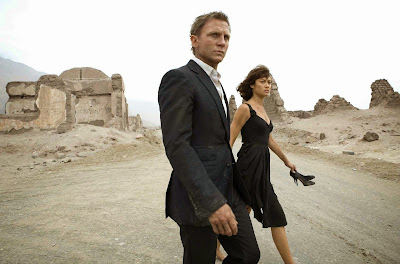 A difficult follow up to the excellent Casino Royale, Daniel Craig’s second outing as Bond has many impressive moments but is held back by its own restraints and owes too much to its predecessor to truly stand out as its own film.

The return of the Bond franchise with Casino Royale in 2006 owes much of its success to the Jason Bourne films as it does to its new Bond (Daniel Craig). The last Pierce Brosnan Bond film, Die Another Day in 2002, came over as too bloated and smug compared to The Bourne Identity released the same year which was a more fast-paced, lean and mean affair. As a result, MGM Studios started the Bond franchise anew. Losing much of the usual Bond trademarks and creating a cooler, meaner Bond with Daniel Craig that was much closer to Ian Fleming’s original creation resulted in Casino Royale which achieved massive, and well deserved, critical and commercial success. With such a success, the follow up would under much pressure to live up to the standard of Casino Royale and subsequent Bourne films (The Bourne Ultimatum in 2007).

The result is Quantum Of Solace which, while maintaining the tone set by Casino Royale, is both entertaining but also frustrating. Starting off strong with a first for a Bond film, in that it is a direct continuation of the previous installment, with an impressive car chase and a sequence where in questioning a subject he reveals a secret organization with people in Bond’s own ranks that turns into a thrilling rooftop chase where Bond, and Craig, step up to show they aren’t afraid of the competition set by Bourne and Matt Damon. However, with such a strong set up for a later conflict, it is shame then that Quantum Of Solace seems content to take its time following lesser villains and their schemes. Having Bond search for the man responsible for the death of his lover, Vesper, from Casino Royale would make for a decent sub-plot, but with the man responsible being revealed to little more than a minor player and the amount of time devoted to the search, by way of bringing down a middleman (Amalric) who plots to buy up land in Bolivia and destabilize its government, results in a film that never really sets out to establish itself a worthy addition to the franchise and rather wraps up loose ends from Casino Royale while setting up events up for the next Bond film.

There are some things to enjoy about Quantum Of Solace, quite a bit in fact. As expected from a Bond film, the action sequences, the stunt work in particular, is excellent. With an opening car chase, rooftop chase, sequences on water and in the air and a literally explosive finally, Quantum Of Solace offers plenty of breathtaking action sequences with minimal obvious CGI (with the exception of an obvious parachuting sequence). In addition to great action and plenty of decent intrigue involving Bond’s initial attempts to investigate the secret group, named Quantum, and his subsequent attempts to avoid his own government as he goes rogue, we also have another strong performance from Daniel Craig as Bond. Keeping with the cold, yet charming Bond he played in Casino Royale, he makes Bond’s efficiency believable while also hinting at the deeper emotional depths of his character that Bond understandably tries to deny.

In addition to Craig as Bond, we have strong support from Judi Dench who reprises her role as M and with Olga Kurylenko who performs admirably as female equivalent to Bond’s emotionally damaged spy, a character who is also seeking her own revenge and is as willing to use Bond and others to get it as Bond himself. In terms of villains, the main villain Dominic Greene (Mathieu Amalric) is less impressive. Written of early as a middleman who can provide Bond with the identity of Vesper’s killer and also as but one member of the larger Quantum organization, little is done to really establish him as a credible threat to Bond himself. Amalric, while generally a fine actor, also lacks the physical presence of Daniel Craig and thus is unable to compete with Craig when on screen together. Like much of the film, Amalric’s Greene is merely a step on the ladder to a bigger and more dangerous enemy/film in Bond’s future.

Overall, while maintaining an impressive Bond in Craig and offering some very strong action sequences, Quantum Of Solace is too occupied with other Bond films both past and those yet to be, that it struggles to really satisfy or stand alone. It is a film that will entertain for the most part but will be enjoyable at a later date when the next Bond installment is made and its place in the overall scheme is revealed. A solid installment but will ultimately be less memorable than Casino Royale.