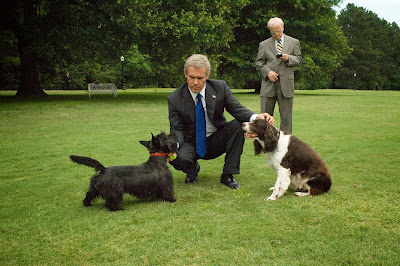 At best, an average biopic of the most controversial American President since Nixon, but, at worst a disappointing and toothless effort from Oliver Stone, a director known for controversy himself.

On paper, W. (pronounced ‘Dubya’) looks to have the potential to be another classic in the filmography of director Oliver Stone. A biopic of an American President, an unpopular one at that, in a time when the US is embroiled in an unpopular war, which for Stone, who is known for his anti-war films (Platoon, Born on the Fourth of July) and his biopics (JFK, and the scathing Nixon) seems to be the ideal mix of subject matter and timing (with George W. Bush’s presidency in its final months). However, the result is something that is not only unsatisfying as a biopic, but also incredibly disappointing coming from a director such as Stone.

Opening in the White House, with George W. Bush already President and debating the name he and his administration are going to give to the Iraq/Iran/Afghanistan alliance they want to reveal to the American public to aid in their plans to invade Iraq, the tone is somewhat mixed. Perhaps harmed somewhat by the real-life Bush still being in office, perhaps also by the large amount of ridicule he has faced on his actions and demeanour, this opening scene strikes a somewhat humorous (presumably unintentional) tone. While the casting of actors such as Brolin as Bush, Wright as Colin Powell, Dreyfuss as Dick Cheney look the part and certainly go on later in the film to inhabit the personalities of their characters delivering believable performances without merely being caricatures, in this early scene the commitment to the look and demeanour of these characters almost feel like parody. As said, while these roles are developed better later, diving straight into scene such as this so early in the film still mixes the tone of the film. Will W. serve to ridicule George W. Bush? Illuminate his past and his motives? Or will it outright condemn the man? The opening scene, and scenes, leaves this uncertain and by the end of W. the film ultimately fails to do very much of any.

Initially, once Stone starts jumping back into the past to show George W. Bush’s early years, we see many scenes with great potential for the future of the film. Leaping right into Bush’s college years and a fraternity party, we get a glimpse of Bush’s early, fun-loving, responsibility avoiding years. While little of Bush’s past is unknown given the scrutiny he has faced during his Presidency, actually seeing the enactment of Bush as beer-drinking, girl chasing young man who fights, gets arrested and constantly disappoints his father, Bush Sr., is a refreshing change from the Bush audiences have seen in the news these past 8 years. These scenes not only allow Brolin to deliver a more rounded performance as Bush, one that extends beyond looking the part or inhabiting the man’s mannerisms, but also serve to look at the events that helped define how a man who avoided responsibility might ultimately take on the ultimate responsibility and this lies in his relationship with his father.

However, while early scenes between Bush Jr. and Bush Sr. lay promising groundwork for what is to follow, Stone unwisely chooses to make this relationship the primary focus of defining Bush Jr.’s motivations. While it does not, and should not, excuse Bush Jr. of his later mistakes it certainly helps to take away some of his accountability. Skimming by other defining relationships in George W. Bush’s life such as that with his wife Laura (ably performed by Elizabeth Banks but sidelined to a role of supportive wife who keeps her opinions to herself and off screen), with Karl Rove (again performed admirably by Toby Stephens but without insight as to how their relationship developed) and most importantly his relationship with his faith which develops and strengthens all too quickly, we are ultimately left with a man who is driven mainly by Daddy-issues.

Also, Stone’s focus on George W. Bush’s relationship with his father leaves him avoiding the more controversial acts of his Presidency such as his election itself and his actions on 9/11 with more present days scenes taking place post-9/11 and pre-Iraq War as Bush Jr. and his administration look to how they can justify the war with Iraq and Iran the seek to engage in. While many of these scenes display evidence that Stone has lost all his skills for delivering political commentary on his subject matter (Colin Powell is portrayed as a reluctant hero, while Cheney and Rumsfeld are demonised as unsympathetic power-mongers) it rarely digs deep enough or for long enough before veering back to Bush Jr.’s father issues.

Performance-wise, W. does manage to excel. Brolin manages to embody the personality of George W. Bush by showing he can do much more than merely look the part and speak with Bush’s mannerisms. Brolin manages to make Bush Jr. a much more sympathetic character than many could imagine him being while also remaining true to the personality seen in the public eye. In supporting roles we have excellent performances from Toby Stephen’s as Bush’s advisor Karl Rove and from Jeffrey Wright as Colin Powell, Bush’s Secretary of State. Powell is portrayed as the reluctant, resistant figure to Bush’s actions with Rove the talented spin doctor that helped Bush justify his actions to many. Richard Dreyfuss and Scott Glenn deliver unnerving performances as Dick Cheney and Donald Rumsfeld, the two men judged even more harshly than Bush during his presidency. While they are perhaps portrayed somewhat as caricatures (a little too evil?), given the actions and words of the actual men themselves these performances are nevertheless believable.

Overall, despite occasional moments of insight, of political commentary and despite some generally excellent casting and performances, Stone’s decision to focus too frequently on George W. Bush’s family relationships and not enough on other relationships or on the more controversial decisions he has made and the reasoning behind them result in a very unsatisfying biopic and an even more unsatisfying Oliver Stone film. Perhaps if Stone had waited a few more years to distance himself from the presidency and any critical/audience backlash he may have faced if he openly engaged the subject matter of Bush Jr.’s life while he still held the office of President, then Stone may have made a much more daring and satisfying film. Instead we are left with W., a film as disappointing as the man himself.