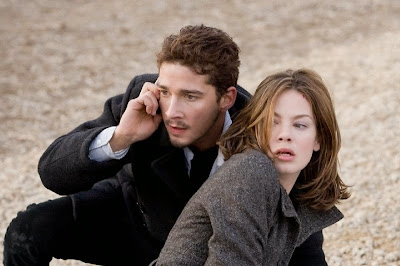 An entertaining thriller that just about makes up for its preposterous plot and lack of originality by delivering plenty of effective thrills and action sequences.

Reuniting director D.J. Caruso and actor Shia LeBeouf, Eagle Eye is a fairly entertaining action thriller that, like the pair’s previous outing Disturbia, takes a Hitchcock-style premise and adapts it for the Blockbuster generation. Where Disturbia was loosely inspired by Hitchcock’s Rear Window, Eagle Eye owes inspiration to Hitchcock’s North By Northwest in its innocent man on the run for something he didn’t commit with a larger conspiracy at play. However, as many a discerning filmgoer can imagine, no-one can match Hitchcock for building and maintaining suspense and while the set up for Eagle Eye is very strong, the execution and resolution is certainly less effective.

Despite some highly enjoyable action sequences (mostly all chase scenes too), the identity of the mastermind behind why copyboy Jerry (LeBeouf) has been framed as a terrorist and driven on the run along with distraught mother Rachel (Monaghan) is built up to be so powerful that much of the plot itself makes no sense until the end and even then still defies much logic. The necessity that Jerry be drawn into the plot the way he is, makes little sense due to how it draws attention to the mastermind’s plans by government agents Morgan (Billy Bob Thornton) and Perez (Rosario Dawson) and even the why as to why Jerry is picked rather than someone else only begins to make sense much later and stretches the plausibility as to how much Jerry and his, recently deceased, brother are/were alike.

Still, despite the need to suspend a lot of disbelief, the already mentioned chase scenes/action sequences are well executed and certain to satisfy fans of the action/thriller genre. In terms of characters, whilst only Jerry is given any real character development of insight into his past, most of the characters serve their purposes and are helped by the performances of the actors playing them. Billy Bob Thornton delivers a good performance as FBI Agent Morgan, Rosario Dawson is able as Agent Perez although has a certainly less developed role than Thornton’s. Michael Chiklis plays against type as a Secretary of Defense that actually seems to care about lives while Michelle Monaghan is strong enough to generate empathy for here character whilst also being forgettable enough as to not distract scenes away from the film’s star Shia LeBeouf. LaBeouf further demonstrates his likeability as a leading man, though this time around his character is somewhat less enjoyable that previous performances which may be due to his usual nervous wisecracking being toned down for this role. However LeBeouf still manages to carry the film well and is also able to point out the various improbabilities in the plot in a way that makes them a little more acceptable.

Overall, while Eagle Eye suffers under its own attempts to deliver a high-tech, modern blockbuster equivalent of a Hitchcock classic, the execution of the action is enjoyable as are the performances. Enjoyable if not particularly memorable, Eagle Eye is a decent enough film provided you are able to suspend your disbelief.