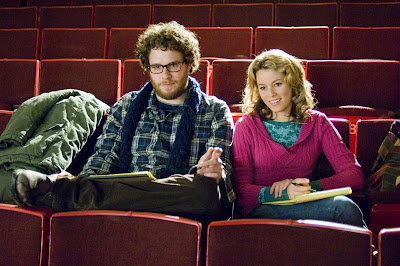 Kevin Smith’s eighth film, and second not featuring his cult creations Jay & Silent Bob, is likely his most mainstream effort to date and while it sometimes lacks the bravery of some of his earlier pictures it still entertains and is very funny.

Kevin Smith and Seth Rogen make a good team. Smith has been making low-budget, ‘Indie’ comedies for 14 years now. While none of his films can make claims to being huge hits at the Box-Office, they’ve certainly garnered ample critical appraise based on Smith’s risqué yet honest dialogue filled with movie references, particularly Star Wars, whilst also capturing the thought and feelings of entire generations. Seth Rogen, with the help of director/producer Judd Apatow has done much the same as Smith only with slightly tamer material and with much greater commercial success with 40 Year Old Virgin in 2005 followed by Knocked Up, Superbad and 2008’s Pineapple Express. It comes as no surprise then that this pair should eventually collaborate on a project together.

However, where Zack and Miri make a Porno disappoints is in the use of Seth Rogen and Elizabeth Banks in these later scenes. While Smith, Rogen and Banks, are happy to talk dirty, they all seem too afraid to actually ‘be’ as risqué which, considering the film’s title and the willingness of the supporting cast to engage in raunchy scenes is disappointing. This is especially so since not only has Smith shown he is more daring with his main stars within his earlier pictures, but also in knowing that Rogen and Banks have had much raunchier scenes, Banks in particular in 40 Year Old Virgin. However, Rogen and Banks are much more commercial now than they were then and by extension, in starring in a Kevin Smith film, they bring that level of commerciality to Zack and Miri. Perhaps all involved were a little too scared to cut as loose and brave as they had when there were less well known. Also, while Smith has shown he is willing to take more unpredictable paths with the relationships of his main characters, avoiding the usual Hollywood ending, in films like Clerks and Chasing Amy, here the path of Zack and Miri is a predictable one. This is not really a bad thing as the cast are likeable enough that the ending the film has is the one audiences want but is still a little traditional for a Kevin Smith film all the same.