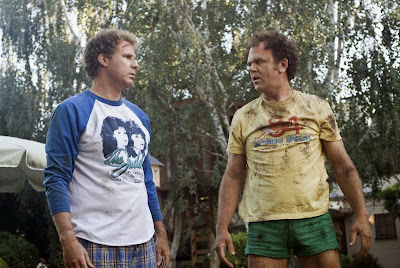 Will Ferrell reunites with fellow Talladega Nights director, McKay and co-star Reilly for an amusing comedy about sibling rivalry between two, immature, 40 years olds with much success.

How much enjoyment you get out of Step Brothers depends greatly on how much you like Will Ferrell’s man-child persona or John C. Reilly’s recent conversion from drama to comedy. If you’re not a fan of either then this film is likely not for you. If you are a fan then this will entertain and is of a much higher quality than some of Ferrell’s more recent efforts (Semi Pro and Blades of Glory) due to the chemistry between Ferrell and Reilly and with the supporting cast of Richard Jenkins (TVs Six Feet Under) and Mary Steenburgen as their parents.

Ferrell plays Brennan and Reilly plays Dale. Both a 40 year olds that never learned how to grow; Both stayed home, living with their parents and living off their charity but, when their parents meet and decide to get married, Brennan and Dale find themselves thrust together under one roof when see their lack of achievements reflected in their counterparts, and with the threat of losing their easy lives when their problems are highlighted to their parents forces these step-brothers to abandon their hate-hate relationship and unite. However, neither brother having learned how to fend for themselves, find their shared resources still amount to very little.

The comedy, while usually following similar methods despite changing intentions, is frequently amusing. Watching two grown men behaving and fighting like children has its moments of hilarity, though there are occasional gags that fall flat such as a repeating gag involving sleepwalking habits, but most succeed due also to their sheer lunacy (one testicle gag in particular generated a lot of laughs). There is are also amusing confrontations with a third brother, Brennan’s younger brother, Derek (Adam Scott) whose success and independence humiliates Brennan and Dales failures all the more even to the extent that Derek is able to conduct a family rendition of Guns N Roses hit “Sweet Child O’ Mine.” The efforts of the brothers, once they end their rivalry, to find jobs while prevent the selling of their home by their parents also entertains with many gags at the expense on the brother’s ineptness. A temporary change in tone for the third act though slows the gag rate down as the brothers are forced to accept reality and grow up which leads to a predictable resolution to their problems, including reuniting their parents who split over their attitudes to having 40 years old sons living at home, but there are still some worthy moments of laughter.

While Ferrell and Reilly perform to type, the supporting cast are of a high quality. Mary Steenburgen is particularly impressive, not known for appearing in comedies, least of all the type that Ferrell produces; she delivers a warm, charming performance as the boys’ mother and is likewise well supported by Richard Jenkins as their father who gives an amusing performance as a man frustrated by his sons’ ineptness. Most impressive is Adam Scott as the ultra-successful younger brother Derek who more than manages to hold his own when sharing scenes with Ferrell and Reilly.

Overall, this is a comedy that succeeds on the likeability of its stars and their ability to play to the kind of physical comedy that they are skilled in. While the plot itself is less impressive and the third act a little too slow and laughter free, the success rate of the gags in the rest of the film and the strong supporting cast make Step Brothers a superior addition to Ferrell’s comedy catalogue.