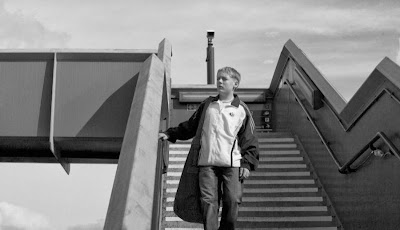 Following on from the critically acclaimed This Is England, director Shane Meadows follows its success with a smaller, quieter film about friendship across cultural differences that further demonstrate his keen eye for true-to-life characters and situations.

Originally meant to be a short film, created in part to commemorate the building of Eurostar’s international terminus at St Pancreas, whilst Meadows prepared for his next big picture, soon expanded into a touching film about two alienated boys developing a friendship despite different cultural backgrounds. Moving from his usual filming locations in the Midlands, Meadows shows he is just as comfortable working in the even more mixed neighborhoods of London as Nottingham runaway Tomo (Turgoose) forms a friendship with Polish immigrant Marek (Jagiello) who also finds himself often alone in London as his father works on building the terminus with Eurostar.

Meadows again tackles such topics as inner city, working class communities and the lifestyles of their residents with an eye to racial attitudes yet handles them in a natural, somewhat subtle manner. Marek is the son of a Polish immigrant who, while possessing a keen grasp of the English language, is something of a loner, spending his days taking photographs, mostly of the French waitress at a local café. Marek’s father, a single father, is rarely available, working long hours and more content with spending his free time with friends that his son, it is the lack of communication between father and son that distances them both. Enter Tomo; Tomo arrives in London having left Nottingham behind. Claiming to have nothing back there for him to return to he too is a loner with family issues. After a rough first night where he is mugged, his need for company and shelter leads him to seize upon Marek, initially in a bullish manner reminiscent of the attitudes of his attackers the night before (on a side note, the most negative aspects of the London neighborhoods appear due to English nationals, combating the accusations that immigrants face that it is they that harm communities). Tomo’s dependence on Marek for support soon changes those initial, negative, attitudes and the company he in turn provides for Marek develops into a friendship, albeit a secret one kept from Marek’s father.

Thomas Turgoose, having made his debut in Meadows’ This Is England, develops further as an actor here, coming more into the spotlight as the main, English speaking character. His performance is a strong one, displaying Tomo’s vulnerability as well as his need to convince himself and others of his ability to survive independently. Piotr Jagiello is likewise impressive as the quiet, unassuming Marek who has been forced to live alone but lacks the confidence to voice his feelings to his father or to share his life with others. Even Marek’s father is well presented by Ireneusz Czop, who knows he is neglecting his son but, like Tomo, has difficulty admitting his failures and reaching out to his son to give and receive support, instead throwing himself into his work. It is then the effect that Tomo and Marek have on each other that leads to a confrontation after Tomo introduces Marek to alcohol after the waitress they care for, and formed a friendship with, leaves them and unable to process their reactions soberly, drink and are found by Marek’s father. This, initially uncomfortable, confrontation becomes the incident that pushes all three characters to assess their lives and how they relate.

Ending on a sequence filled with hope, uncharacteristic for Meadows, Tomo and Marek end the film as stronger people and Eurostar get their sequence promoting their service’s ability to keep people connected. Overall, this is a short, yet strong effort from Meadows and demonstrates his versatility as a director. Its messages about friendship may be familiar ones, but they are well represented within Somers Town.