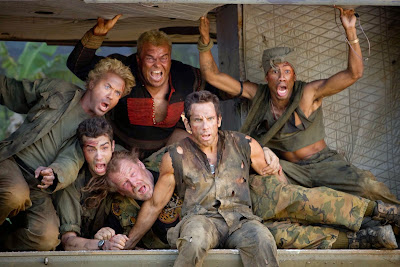 An entertaining, OTT comedy satirizing Hollywood and the war movie genre with jokes that, thankfully, hit more than they miss.

Ben Stiller returns to the director’s chair for Tropic Thunder with all the OTT sensibility that made Zoolander so entertaining but with a far bigger budget. The budget is put to good use, this being a send up of war films, with huge explosions, gunfire and helicopters. Tropic Thunder is certainly one of the most impressive looking comedies of recent years. The comedy however is a mixed bunch. Tropic Thunder works best when it is satirizing the conventions of the Hollywood industry (especially Hollywood agents), helped significantly by several inspired casting decisions.

Stiller himself stars as action star Tugg Speedman, looking for a big hit after a recent attempt at ‘serious’ acting backfires (a hilarious, if controversial stab at Hollywood’s admiration for acting roles involving characters with disabilities). Stiller is entertaining as Speedman, though his role is very familiar to many he has played before playing a dim-witted, machismo fuelled movie-star who refuses to believe, when he and his co-stars find themselves in an actual war-zone, that his reality is anything other than a movie set prepared for his benefit. His commitment to this character helps make his character’s commitment to his reality more entertaining as a result. However, while Stiller is the star, he is outperformed by several other performances.

Robert Downey Jr gives a stand out performance as Kirk Lazarus, a multi-award winning actor, whose commitment to character involves him having his skin surgically dyed to play the role of a black Sergeant. The role itself is hilarious, avoiding offending African-Americans by satirizing how far some actors go to get into character and helped by having African-American actor Brandon T Jackson play another actor to point out the ridiculous lengths Lazarus has gone too. Downey Jr plays the role with confidence and conviction, perhaps satirizing his own commitment to playing a method actor. Another stand out performance is an, initially uncredited, appearance by Tom Cruise as top Hollywood producer Les Grossman. Cruise, almost unrecognizable with a bald-cap and fat suit, seems to relish in the opportunity to play the foul-mouthed, power-crazed producer with scenes involving threatening heroin dealers and dancing to rap music amongst the film’s highlights. Tropic Thunder also has strong support in smaller roles from Matthew McConaughey as Speedman’s over-earnest agent, Steve Coogan as Tropic Thunder’s suffering (in one scene literally) director, Nick Nolte as a gruff former P.O.W. and Jay Baruchel as a young, rookie actor who is perhaps the film’s most sane character and it’s heart.

Unfortunately, between the superb performances from Downey Jr and Cruise and the headlining antics of Stiller, Jack Black is sidelined for most of the film and provides moat of Tropic Thunder’s least entertaining gags. Playing a low-brow comedy star on drugs, Black is reduced to a mainly one-note performance playing it twitchy and providing the film with fart and toilet jokes whenever required. With little else to do and many other, more impressive, performances in the film, Black is often an unwelcome presence when he is able to make an impression at all. This is perhaps a casualty of Stiller cramming too many ideas and gags into Tropic Thunder than it can handle. While there are many great gags and inspired scenes and set pieces, Stiller also over-extends himself on some occasions. Tropic Thunder is perhaps 30 minutes too long with gags involving Speedman’s past performance as a mentally-disabled farm-boy becoming excessive and several scenes between Speedman’s capture by Heroin dealers and his rescue that are unnecessary and less funny.

Overall, Tropic Thunder is certainly very funny. Worth seeing for Robert Downey Jr and Tom Cruise’s performances alone, the film also boasts some very funny action scenes and plenty of successful jokes at the expense of Hollywood. Jack Black might be wasted and the film overlong, but Tropic Thunder is still very entertaining.