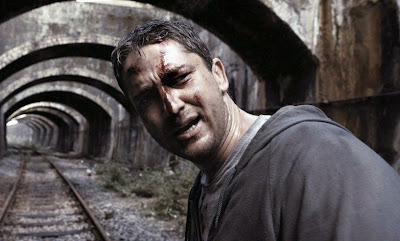 After the critical and commercial failures of Swept Away and Revolver, Guy Ritchie is back, returning to his roots but with added confidence and maturity. The result is RocknRolla, possible his best film to date.

While some critics and audiences might be quick to dismiss RocknRolla as Guy Ritchie taking the easy option of returning to the genre that originally brought him success, after two box-office failures and accusations of losing his way after achieving fame and fortune, those critics are going to miss out on a very good crime caper. RocknRolla isn’t so much about the kind of gangsters seen in Lock, Stock & Two Smoking Barrels or Snatch, but it does deal with dodgy dealers and small time crooks involved in the kind of complex story of interweaving plotlines that Ritchie is known for and comfortable with. However, while there is humor, this time around Ritchie has dropped the cheeky, somewhat smug, tone of his earlier films and the glamorized violence for something that feels altogether more grown up, possibly like Ritchie himself.

The plot, more relevant to today than that of Ritchie’s previous efforts, deals with back door property dealings, rich foreign investors, a few small time crooks caught in the middle and a, presumed dead, rock star living the rockstar (dubbed ‘RocknRolla’) lifestyle. After scamming two ex-crooks, One-Two & Mumbles (Butler & Elba), out of money who wanted to get onto the property investment ladder, and with an eye to likewise scamming a rich Russian investor also looking for land deals, underworld property dealer Lenny (Wilkinson) and his right hand man Archie (Strong) find themselves in a predicament when the investor’s money is stolen as is the ‘lucky painting’ the investor left in Lenny’s care. From here develops a number of plotlines involving dodgy accountants, Russian hit-men, Lenny’s rockstar step-son Johnny Quid (Kebbell), an informer turning members of the cast in to the police and plenty of memorable characters and performances.

Ritchie seems to be back on form with RocknRolla, juggling the many plotlines and characters but with more focus with humor occurring naturally from events in the plot rather than distracting from it and also leading to some interesting twists, turns and moments of philosophy. While RocknRolla is an improvement on his earlier efforts, there are a few elements that that demonstrate Ritchie’s tendency to let his ambition overcome him as there are certainly a few characters, while pleasant, that are surplus to requirements (Piven & Bridges band managers) and the ending wraps up a little too nicely and consequence light as Ritchie sets things up for a sequel (Ritchie has expressed an interest in making a trilogy involving RocknRolla’s cast and characters) but the film is still a very satisfying affair and one that re-establishes Ritchie potential to be one of Britain’s top directors.

RocknRolla also boats an impressive cast. Gerard Butler (300) is entertaining as lead character One-Two, an accomplished, if somewhat naïve, crook who further builds upon his leading man potential here and has strong support from Idris Elba (TV’s The Wire) and Tom Hardy as his friends Mumbles and Handsome Bob, the latter of which has an interesting and entertaining relationship develop with Butler’s One-Two. Also sharing the spotlight, and narrating RocknRolla, is Mark Strong (Stardust) as Archie, the number two man to Wilkinson’s underworld boss and a man who has been in the game long enough to see most of the angles. Strong delivers a good performance, one that acts as the balance between all the other characters and plotlines. Tom Wilkinson relishes in his chance to chew the scenery as Lenny, the underworld boss, likely the only character that occasionally veers towards caricature, and Thandie Newton provides the necessary sex appeal as the accountant that hires One-Two to rob her Russian investor client and helps kick start the escalating events of the film’s storyline. Finally, and standing out from the rest of the cast, is Tony Kebbell (Dead Man’s Shoes) as rockstar Johnny Quid, stepson of Lenny and presumed dead while in hiding and high on drugs. Kebbell gives an impressive performance taking shots at modern day rockstars such as Pete Doherty, while also demonstrating more intelligence and personality, waxing philosophical with regularity, even when under the influence of drugs than a whole rehab centre full of rockstars could accomplish combined.

Overall, RocknRolla is a very good film. With more confident direction and some excellent performances, it is Ritchie’s best film to date and will, hopefully, help calm the critics and make audiences as eager to see his next film as they were when Ritchie first made his directorial debut.