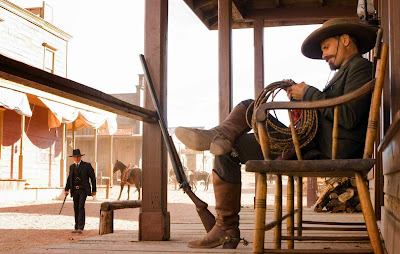 A decent, if unambitious, Western that offers some decent scenes and performances but it is a little too laid back for its own good.

There is nothing really bad to say about Appaloosa, the western adapted by Ed Harris from the Robert B. Parker novel, but there is also nothing particularly great or memorable about Appaloosa either. When viewing Ed Harris’ adaptation (in which he also stars), there is almost the feeling that this is a period Harris himself would like to have lived in as he and his co-star, Viggo Mortensen, take a laid back approach to their characters and their tale. This laid back atmosphere results in some of Appaloosa’s strong moments such as the casual witticisms exchanged between its two leads but also contributes to the film’s weaknesses, in that, when something important does occur in the film’s story, it is over quickly and our characters are soon back to sitting on the porch of their office. At first this feels somewhat refreshing, a natural, realistic approach to confrontations by two men who’ve seen a lot and are too weary of it to give it much energy but as the lengthy runtime continues on, it contributes to the feeling that not enough occurs in the film to keep your attention.

The characterization in Appaloosa is fairly strong. Little real details is given on the backgrounds or motivations of any of its characters with most willing to describe themselves as experienced guns for hire and allowing audiences to come to its own conclusions. The interplay between characters though is quite strong, especially between Harris and Mortensen and, even though these are men of few words, the sense of a shared history is strong and believable with the already mentioned humor between the two being one of the film’s strengths. Jeremy Irons and Lance Henriksen appear as villain and competing gunman respectively and likewise feel suited to their roles while Timothy Spall leads a group of three bumbling town elders as a sort of comic relief with mixed results.

However, Renee Zellweger’s performance as Allie, the woman who comes to Appaloosa and turns many heads, has the toughest role in the film playing the somewhat flirtatious Allie who will cast a seductive glance the way of whichever man is best suited to look after her needs. Zellweger’s performance is a decent one, portraying Allie’s flaws quite well but is less convincing in demonstrating what makes her character worth the attentions of Harris and Mortensen’s gunmen.

Overall, Appaloosa is an average western. The performances are good though not particularly memorable and the storyline plods along at too sedate a pace, but there is some enjoyment to be had in its dry humor and in the relationship between its two lead characters.