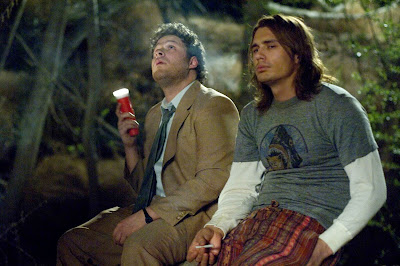 Reuniting Seth Rogen with his Freaks & Geeks co-star James Franco, and Superbad co-writer Even Goldberg, results in Pineapple Express, a truly funny and unique twist on the buddy/action movie.

There have been many films that have starred drug-smoking lead characters, Cheech & Chong and Harold & Kumar all being examples. All of these films though have been screwball comedies with little ambition beyond making as many drug-fuelled gags as possibly, usually with actual story content and characterization being of secondary concern. Trust Seth Rogen, star, writer and producer of hit comedies such as Superbad and Knocked Up. Taking his laid back, likeable loser persona and placing him a storyline that finds more comedy in the effects of weed on its users and filtering it through an action/thriller plotline that also exposes the humor to be found in the conventions of the action genre (much like the film Hot Fuzz) and still manages to include a genuine and touching tale about friendship between Rogen’s likeable loser and his well meaning drug-dealer played by James Franco.

While directed by David Gordon Green, an independent director not known for comedies but for introspective character pieces, Pineapple Express is nevertheless a very funny comedy/action film that likely owes most of its success to its star’s, Seth Rogen, talents as a writer and comedic actor. David Gordon Green is known for getting good performances from his actors though so his presence is likely more felt in the development of the supporting cast and in also providing a more grounded perspective that allows this ‘stoner’ action film to feel more true to life an not straying so far into OTT situations that the story can’t find its way back to its characters.

While not going into the histories of its characters or giving many of them chances to develop on screen, Green nevertheless, with help from Rogen & Goldberg’s script, breathes life into most of the film’s characters including minor ones, through half mentioned comments of past shared experiences and mannerisms that demonstrate the kind of comfortability people develop with others over time. Henchmen, Matheson & Budlofsky (Robinson & Corrigan) demonstrate as much shared history and chemistry as lead characters Dale (Rogen) and Saul (Franco) and even the film’s villain, drug Kingpin Ted (Gary Cole) takes time to joke around with his partner in crime (Rosie Perez) after talking business. The care taken to subtly flesh out its cast elevate Pineapple Express above the average ‘stoner’ and action comedy making most characters a pleasure to watch rather than merely performing to type and filling screen-time between scenes starring its film’s stars. Pineapple Express also benefits from a strong cast with roles and cameos featuring veteran actors such as Gary Cole, Nora Dunn and Ed Begley Jr and its lead actors, Seth Rogen and James Franco, demonstrate great chemistry developed from their previous collaboration on TV series Freaks & Geeks. While Rogen entertains with his usual likeable onscreen persona, James Franco really impresses as perpetually stoned, yet good at heart, drug dealer Saul. Franco, who has usually played straight and serious lead roles in films such as Annapolis and the Spider-man films and often suffering in comparison to his co-stars who have more interesting and charismatic roles, Pineapple Express feels like it has provided Franco with the opportunity to free himself from stereotype and actually have some fun on screen and demonstrate the skills for comedy he possessed as a TV actor that he has been unable to show in his big-screen roles to date.

In addition to finding comedy in the clumsy attempts of its stoned lead characters attempting to escape a drug kingpin after Rogen witnesses a murder and leaving evidence behind to link himself and Saul (Franco) to the incident, also finds comedy in subverting action movie clichés as our two leads, having seen many action films and television shows themselves, find situations rarely going to plan. Pineapple Express also being a film starring and co-written by Rogen, a lot of comedy is found in the witty dialogue, much of it ad-libbed and most (though not quite all) generating strong laughs. The moments of fake attempts at machismo between Dale (Rogen) and Saul’s friend Red (McBride) in particular are highlights of ad-libbing leading to hysterical and unpredictable lines and put-downs.

However, because the cast are so good at portraying just how likeable and inept its lead characters are, it ultimately means the climax of the film suffers slightly at how well Dale and Saul are able to solve their predicament relying too much, perhaps, on dumb luck. While the ending does have some moments of predictability, brought on by the required and inevitable ‘happy ending’, even the climax is filled with successful jokes and sight gags that it still remains satisfying.

Overall, Rogen, with help from his director, co-star Franco and co-writer Goldberg, manage to blend action movie and stoner comedy together with much success resulting in a film that certainly entertains on many levels.