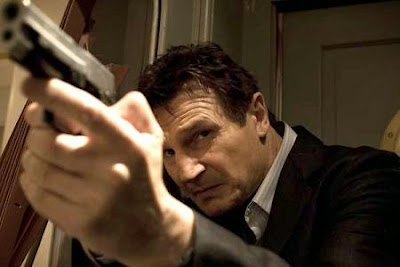 A decent action/thriller that owes most its success to a suitably gritty performance by its star, Liam Neeson.

Taken is another action/thriller from the studios of Luc Besson, but where other efforts have focused on bigger action and featuring less established stars, Taken is a somewhat darker affair and benefits from the lead performance of Liam Neeson, well known as a talented oft-award nominated dramatic actor, who adds much gravitas and credibility to his role as an ex-CIA operative on the hunt for his kidnapped daughter.

The plot of Taken is fairly straight forward, an ex-CIA operative (Neeson), estranged from his ex-wife and daughter, finds his daughter kidnapped while in France leaving him with days to use his skills to locate her or lose her forever. With a lesser known actor, or one with less experience in drama, the abilities and weariness that Neeson infuses the character of Bryan with, might have come across as too forced or unbelievable but, with the credibility that an actor like Neeson brings and the decision to keep the action sequences smaller (i.e. guns but kept close quarters and with few explosions) adds to a genuine feeling of danger and of Bryan’s desperation.

Neeson is excellent choice to play Taken’s lead role, able to add feeling into his character’s expressions and body language to support the dialogue. In supporting roles there are decent, if one-dimensional, performances from Famke Janssen as Bryan’s bitter ex-wife and Maggie Grace as Bryan’s good natured, if spoilt daughter. However, while Taken has a strong hero/anti-hero in Liam Neeson, it is not so well served in the villain department. With no overall mastermind to the operation that kidnaps girls abroad, including Bryan’s daughter, we are left with many, faceless, goons working in various operations. All are dubiously portrayed as ‘foreigners’ (Eastern European or Arab) exploiting young women which, while also somewhat morally unethical, leaves no real impact as Neeson’s Bryan works his way through them one, or a few, at a time.

So, while the performance from Neeson is enjoyable, as is the execution of several action sequences, the overall storyline is less satisfying in its lack of ambition or originality. The dialogue is also somewhat lacking, with only Neeson getting any decent moments to deliver memorable speeches.

Overall, while not particularly original or memorable, Taken is still worthwhile entertainment if only for the strong performance of Liam Neeson who makes an unlikely yet enjoyable action hero.