Diary Of The Dead 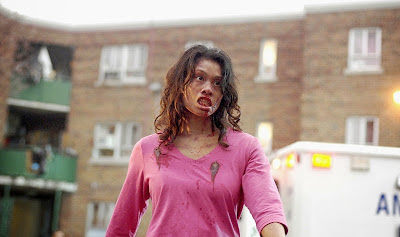 A decent attempt by the father of the zombie genre to add some originality to the genre. The results are only partially successful and is both helped, and handicapped, by Romero's decision to go back to low-budget.

We all know that without Romero's Night/Dawn/Day (and later Land) of the Dead films that it is likely there wouldn't even be a zombie genre in horror. After working with studios, Romero decided to revisit his roots by going very low budget this time and going back to the beginning of his franchise by retelling that first Night of the Living Dead but through new sets of eyes. This time those eyes are through the lense of a video camera belonging to a student and his friends who are filming their own horror film in the woods when the dead begin to rise and they find themselves living out something far worse than they could imagine.

The documentary style works quite well, though the effect suffers slightly by coming out so soon after the larger budget Cloverfield that uses the same technique. Here though, instead of the Blair Witch/Cloverfield device of this footage being 'found', we have a narrator, one of the students, who tells us that this footage is real and that it has been edited into a film designed to scare you as well as show you what happened. Allowing us to see the footage edited this way, with narration allows Romero to critique society as he has done in previous films. Here Romero attacks the media, particularly the 'spin factor' of government/corporate sponsered media as they try to play down the truth of the events occuring. One sharp example of this is us witnessing the unedited footage of an attack at the start of the film that was put on the internet only to appear edited later when our characters see it on TV with a police chief denying that the situation is as dire as first reported.

Romero's criticisms of the media though are now so one-sided as to look solely at the mainstream media and censorship. He also criticises the internet generation of Youtube and Myspace and the popularity of anyone being able to film their own footage and upload it to the internet for all to see whether it is wnted or not and how the amount of footage out their allows us to see as much coldness and cruelty in society as we accuse the mainstream media of possessing. Footage of people torturing zombies and filming it for their own amusement is particularly disturbing and our 'director' within this film, a boy named Jason, is likewise cold as he documents events and often chooses to film his friends under attack and dying rather than help them.

So, while Romero's decision to go low budget helps give him the freedom to make the film he wants with the message he wants, the low budget aspect also threatens to undermine the actual horror. The cast is filled with unknowns and of this results in a mixed batch of performances. Our heroine is generally fine though sometimes struggles with some clunky dialogue while an English film studies professor is highly entertaining. The rest of the cast are quite stiff (pun not intended) and are annoyingly amateur. This might be intentional on the behalf Romero (these being amatuer filmmakers) but it also means we are less than interested in caring about the fates of most of the cast and the inevitability of some of their deaths lacks impact. The scares themselves only succeed some of the time but the low budget nature of the film does allow for some of Romero's impressive make up effects and gore which is more interesting than CGI.

Overall, the film is a decent addition to Romero's zombie saga. It is good to see he hasn't lost his edge when it comes to socio-politcal commentary but the option to go low budget, in today's media, often brings the look and feel of the film perilously close to that of the Youtube generation is sometimes criticises.