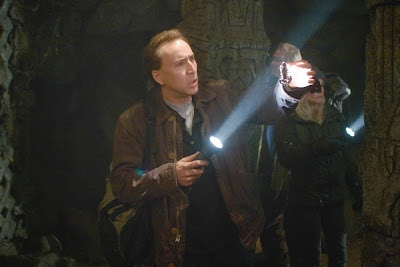 An entertaining follow up to National Treasure, Book Of Secrets provides more of the same in treasure hunting adventure, complex government conspiracies and puzzles to be solved. This series of films succeeds in being a more fun Da Vinci Code style of film though still provides nothing that could come close to challenge the fun and adventure of the Indiana Jones films.

Nicolas Cage returns as our hero, Benjamin Gates, and slips right back into character. Cage clearly enjoys the adventure and his brand of tics and behavioural eccentricities is more acceptable when he's playing a role for enjoyment (rather than playing things deadly serious where his mannerisms can distract). Most of the cast is also lured back from the first film too. Diane Kruger is more fun this time around though her performance is still a little wooden and lifeless at times. Jon Voight is given more to do which is welcome and Helen Mirren is a nice addition to the cast. Justin Bartha plays the role of comedy sidekick with relish although it is disappointing to find Harvey Keitel sidelined to a virtual cameo role and Ed Harris as our main villain is fine but just a rehash of his earlier roles.

The plot itself is fun in its unbelievability, taking us from America to Paris, to Buckingham Palice in London, to The White House and then to Mount Rushmore collecting clues and artifacts while kidnapping the American President and finding a book full of U.S. conspiracies (including Area 51 and the JFK assassination) along the way. Enough little facts and educational tidbits are thrown in to make the plot seem more plausible (and make the film more educational, it being financed by Disney as a family film) though the attempt to cram as much of history into its mystery sometimes feels excessively forced and threatens on occasion to bring the momentum crashing down under the weight of it's own ambition.

The climax of the film though is a little disappointing though. The final sequences under Mount Rushmore is a virtual carbon copy of the first film's down to near-identical death traps, villains and with the reveal of the treasure although, like with the first film, it's certainly refreshing to see actual sets and props being used instead of turning to CGI.

Overall, this is a fun film if predictable but is suitable for the whole family. However, it seems set to spawn further installments in the attempt of making National Treasure a franchise and to succeed it will need to show a little more focus and a little less formula than seen in this sequel.