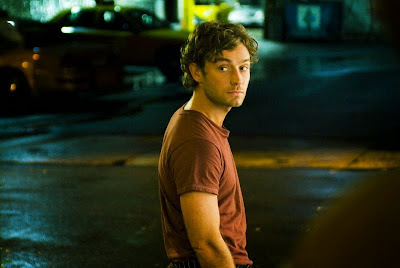 An interesting effort from Wong Kar Wai to try and transfer his style of romanticism to an English-language film.

Wong Kar Wai is an aquired taste. He is well known for his visual style, pop music soundtracks and his desire to explore romance through wistful glances and silences over traditional speeches. His dialogue feels natural and the mood his films evoke often feel unreal, magical. Of course for every fan (like myself) there are those who find his films slow with little happening (or at least it seems that way at a glance).

My Blueberry Nights marks Wong Kar Wai's first attempt at an English-language film in an effort to see if his style translates as well overseas. The results are mixed. The opening half hour feels like vintage Wong Kar Wai as an English cafe owner (Jude Law) spends his evenings getting to know a young woman (Norah Jones) over blueberry pie as she copes with the end of a recent relationship. The mood is similar to that of Chungking Express and Jude Law fits into the mood of the film well and Norah Jones does so especially. Her character is a quiet one, not given to long conversations but rather learns from those she's with as she tries to figure out who she is. In her first film role, musician Norah Jones impresses with a subtle performance.

The same cannot be said of every performance in the film. While there are no 'bad' performances, some just suffer in comparison to those in the directors other films or even the actor's own earlier perfomances. One example is Natalie Portman. While engaging, her character feels like Portman based her mannerisms on those used in Garden State or Closer but without being as well realised. Rachel Weisz appears as the ex-wife of David Strathairn's boozy policeman and delievers 'sultry floozy' well enough but lacks the glamour and walk of Maggie Chung or Gong Li.

Outside of Jones and Law, the only other impressive performance comes from David Strathairn as an alcoholic policeman drinking to forget and deny the pain of his marriage to Weisz's character ending. You can feel the pain in his silences and feel sorrow.

For his first film overseas, Wong Kar Wai has a new cinematographer in Darius Khondji (Se7en) and, luckilly, he manages to capture the style of Christopher Doyle well. The opening and closing scenes in Law's cafe look especially beautiful with rich colours, reflecting light and smooth camera moves between the characters as the converse. Visually, the style has been translated effectively as has Wong Kar Wai's skill in building a strong, mood setting soundtrack using classic pop tunes.

Overall, this film is a strong attempt, by a skilled director, in translating his style abroad. It is visually rich, the mood and atmosphere is maintained and performances are solid, though not outstanding. It doesn't stand up to his previous efforts, and while future English-language films will no doubt improve, I hope Wong Kar Wai does not leave his roots behind permanently.