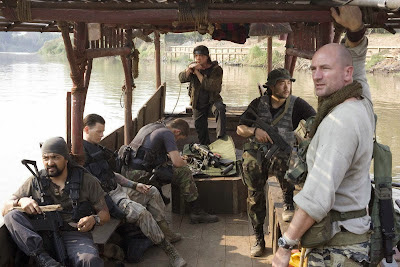 Sylvester Stallone returns to the big screen with a new installment of the Rambo series after a twenty year absence.

After successfully resurrecting the Rocky franchise in 2007 with Rocky Balboa, Sylvester Stallone tries to achieve similar success by resurrecting another character he was famous for portraying after an even longer absence. However, while Rocky Balboa successfully capitalized on the period of absence between it and the last Rocky film by making it an underdog story of an old boxer looking for lost glory in a sport that has changed as much as he has, Rambo instead rehashes old attitudes without updating them to make them relevant to new audiences.

Whilst a fondly remembered, if not critically acclaimed, franchise from the 1980s, the Rambo films main themes were its message that “War is Hell” and in its conviction that John Rambo is a man can that take on all opponents. While the original Rambo films and its lead character were a response to the, then recent, Vietnam War, this new installment in the franchise chooses neither to re-visit that old conflict or confront any the conflicts taking place today. Taking place in Burma, its villains seem faceless and under-developed. Little motivation is given for why the villains exist or do what they do being stereotypical soldiers/slave traders living in the jungle and instead seem to serve no more purpose than to give Rambo someone to fight and to have people to save.

Sylvester Stallone also struggles somewhat in reviving the role of Rambo. Where Stallone’s age helped with his performance in Rocky Balboa, here it hinders it. While he offers many a gruff one liner or stoic sentiment regarding the necessity to confront violence with violence, his age and appearance makes it seem even more unbelievable that he can fight off soldiers in the numbers he faces here than it did in the original films. Even Stallone submits to the reality at first that Rambo is no longer a one man army when, as he goes on a mission to save some missionaries he helped earlier in the film, he realizes the need to hire mercenaries to assist him in his rescue mission. These mercenaries, while fulfilling almost every stereotypical class of soldier, also mean that Stallone’s Rambo sits out of most of the action until the final 15/20 minutes and then proceeds to accomplish what the mercenaries could not.

Despite the thin plot and characters, Rambo does succeed in delivering some decent action/battle sequences. Dark, gritty and violent, even by 1980s action movie standards, the battle scenes leave an impression. It is certainly enough to satisfy Rambo fans or fans of 1980s style action films though if Stallone is intending a deeper meaning in his presentation of violence then it is somewhat lost in the later scenes and the use of operatic music in earlier scenes when the missionaries, that Rambo is out to rescue, are captured comes of heavy-handed.

Overall, Rambo is a missed opportunity to revisit a character whilst addressing more recent attitudes to war. While Stallone’s attempts to capture the look, feel and message of the earlier films are successful enough to entertain the more hardcore fans, it nevertheless feels too dated and unoriginal to impress new or more critical audiences.