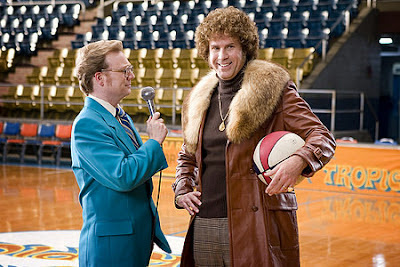 Semi Pro is the latest in a long line of sporting comedies and the line of such comedies that also star Will Ferrell is not a short line either. However, while possessing a few genuine laugh out loud moments, Semi Pro is the weakest film in both lines.

Will Ferrell stars as Jackie Moon, a former one hit wonder musician, who uses his fortune to buy a basketball team in the struggling ABA during the 70s. So great is his love of the team he insists on coaching, playing for and promoting the team but lacks much skill to succeed at any. When a merger between the ABA and the, more successful, NBA looms with only the top four ABA teams given the chance to survive, Jackie Moon must turn his team (worst in the league) into a top four contender. Cue Woody Harrelson's former NBA player with a temper and a series of outlandish game strategies and game promotions.

Will Ferrell is a funny guy, using his large frame and man child enthusiasm to generate laughs. However, he can only go so far this way and succeeds or fails depending on the strength of the script he's working with and the gags therein. Here is where Semi Pro falls down. While possessing some truly funny gags (Ferrel wrestling a bear to lure in crowds to games and moment of Russian Roulette are two highlights), many fall flat or lose momentum as the film moves to quieter character building moments that often relay too much on cliche like Andre Benjamin's talented superstar realising he needs more than flash if he's ever to truly make it to the NBA or Harrelson's character trying to woo back his ex. There just are not enough jokes in the first half and the script feels padded and lacking the wit that accompanies the sight gags of films such as Dodgeball or Talledega Nights.

The climax of the film does show some life, as while the ending is predictable, the gags start to come on thick and fast with more success with the film finally finding its rhythm (much like Ferrell's Jackie Moon and team finally do) but it comes a little late.

Overall, while not a bad comedy, Semi Pro fails to live up to its potential and is only mildly amusing. Maybe its time for Ferrell and the studios to ease of the sports comedies for a while before they drain it dry.