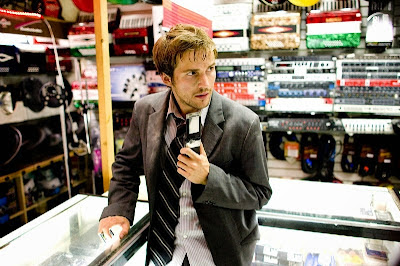 An excellent and long overdue breath of life to the monster movie genre. This is Godzilla for the Youtube generation.

Cloverfield's marketing campaig began lo-key. A viral campaign on the internet with a photo here, a clip of blurry footage there. Its slow tease built up the hype far more effectively than revealing all the details would have accomplished. Does the film live up to the hype? Yes.

My recommendations for anyone going to see this is see it at the cinema, the effect will be more powerful and also prepare yourself for the physical impact this film may have on you. Warnings in cinemas about effects similar to those of motion sickness are not without merit as 85mins of furious, shaky-cam action certainly leaves you dizzy and as disorientated as the cast at times.

The method in which the film is presented is what makes this film so effective. A video-camera filming a leaving party for, main character, Rob becomes a chronicle of an attack on the city when an unknown force attacks the city midway through the party. The man-on-the-scene, from the ground perspective on events makes for a more realistic experience of the events. We see exaclty what our cast see. Half-caught glimpses of a creature moving between buildings, buildings being destroyed, armed forces moving in to defend. Cloverfield keeps you right in with the action rather than cutting away to show you events from a distance.

This technique, even plot, are not original. The technique taken straight from 'The Blair Witch Project' released 9 years ago (complete with a disclaimer at the beginning that the footage you are watching was 'found') and the story of an attack seen only from the our main cast's experiences as the cross into and out of the path of destruction was explored in 2005 in Spielberg's adaptation of 'War of the Worlds'. Cloverfield through still manages to feel fresh and powerful during your viewing of it and this is due in no small part (unfortunate as it may be) to us living in a climate post 9/11. The combination of all of these results in a film that will be as well remembered to our generation as the early King Kong films might have had to cinemagoers almost a century ago.

There are a few faults that stop this film from being perfect though and some lie with the same texhnique that makes the film a success such as... would you really stop to film the monster that much or would you run? There is also the cliche of people making life-threatening decisions that defy common sense (the lengths some characters go to to rescue someone trapped in a building ranks ap there with investigating strange noises in the dark in a horror film). Still... these are mere niggles in an otherwise excellent film.

So... go see this film! Its tense, distubing and it will no doubt have a major impact on how blockbuster films will be made in the future.