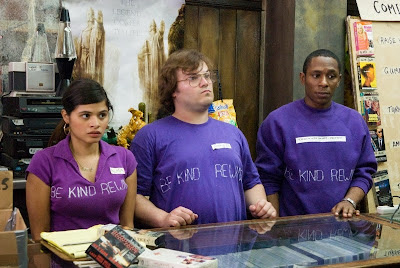 Director: Michel Gondry
Starring: Jack Black, Mos Def & Danny Glover
Charming and incredibly inventive. This film takes an 80s-style plot (trying to save a dilapidated building in a run down area in a way that unites the community) with an inspiring level of creativity.
Mos Def and Jack Black star as Mike and Jerry, two friends who try to save Mike's adoptive fathers video store after a mistake erases all of it's tape. In a store and an area that's rundown and on the verge of demolition, their only affordable option to keep the business alive is to remake the films themselves using whatever, and whoever they can.
The film starts and ends in fairly 80s-ish family film style. A down-on-their-luck group of people on the verge of having what they have left taken from them by a big company wanting to tear everything down and redevelop the area in the name of bettering the community (despite the fact that doing so would involve forcing the community out). What happens shortly afterwards elevates the film beyond the plot with a genius level of visual creativity.
Jerry (Black) accidentally erases all the videotapes in the store Mike (Def) works in after a failed attempt to sabotage a power plant (in a hilarious OTT sequence) leaves Jerry magnetised. In an attempt to save the store while the owner is away, Mike and Jerry try to remake the films themselves only to find the results become more popular in the community than the original films. These re-made films (called 'sweded') are amazing and hold a ramshackle charm. Ghostbusters, Robocop, Men in Black, 2001 and more are just some of the films we see 'sweded' on screen with hairdryers, tin foil, pizzas and cardboard cutouts just some of the materials used to make them. These sequences win you over as much as they win over the people in the film.
The film changes direction a little towards the end as the film companies threaten to sue before enough money is made to save the store and building and their last chance is to make an original film of their own, involving the community, about a local musician. The result holds a special charm of its own, even though it lacks some of the laugh-out-loud inventiveness of the earlier remakes.
On the acting side, Jack Black buzzes with mania, Mos Def adds a dim-witted love ability to Mike and Danny Glover is touching as the old shop owner who hopes to ave his home and business despite being too naive and hopeful to see the world is leaving him behind. The rest of the cast is mostly filled out by unknowns, some good, some not but that adds a little to the believability of this small community.
Overall, it is the creativity of the director that saves this film from being merely predictable. The film feels like a love letter to independent film making and childlike optimism and in this it succeeds. I don't doubt that this film will spawn a craze of fans making their own 'sweded' films and that can only be a good thing for inspiring creativity in future generations of filmmakers.
Rating: 4/5
Posted by Dan at 11:32