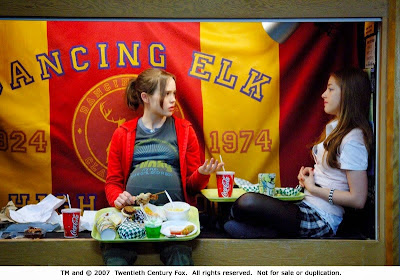 Director: Jason Reitman
Writer: Diablo Cody
Starring: Ellen Page, Michael Cera, Jennifer Garner & Jason Bateman.
Smart, funny, mature and heart-warming, these not only describe the film but Juno herself. If more teens were as smart and sassy as this one it could almost make teenage pregnancy acceptable! That is quite a feat in itself.
Ellen Page is an actress on the rise and one with considerable talent. Her performance here, following on from 2006's Hard Candy, proves she has as much smarts and confidence as the characters she portrays and if she keeps this up she might possibly become a talent that's actually WORTHY of being A-list. Her Juno is smart, very smart and certainly smart enough to know when she's in over her head and when to make the right choices rather than live up to expectation.
Juno discovers she's pregnant, after weighing up her options she chooses to have the baby, but rather than being a role model for anti-abortionists, she makes the decision because she feels its right not because others are telling her what she should do. She chooses to carry the baby but also to give it up for adoption finding a, seemingly, ideal couple in Mark and Vanessa.
While the characters in this film might seem a little 'too-good-to-be-true' (Juno's parents are funny and caring rather than chiding Juno for her mistakes), they still feel true, honest even and this is down to great casting. The couple of Mark and Vanessa are also impressive. Jennifer Garner adds much warmth and depth to Vanessa who seems a little controlling at first while Mark (Arrested Development's Jason Bateman) is charming and funny but shows that these attributes might not make an ideal father. Little seen, but nevertheless memorable, is Michael Cera (of Superbad fame) as the geeky Bleeker, father of Juno's child and unwitting love interest who is unsure how to respond to Juno's situation and is full of shy, quiet awkwardness.
What also stands out amongst the strong performances is the script. Screenwriter Diablo Cody makes her film writing debut here and crams the script with more wit and maturity than a year's worth of sitcom/dramas are usually capable of and while the odd line or catchphrase might feel forced, the rest entertain more than enough to make up for it... and then some. Her career, like Ellen Page's, will be one to pay attention to and I can only hope that they collaborate again in the future.
Overall, this is a great, and mature, comedy with an unlikely role-model/heroine in its star. Any critical acclaim or cult status that it will, no doubt, achieve will be deserved.
Rating: 4/5
Posted by Dan at 12:43