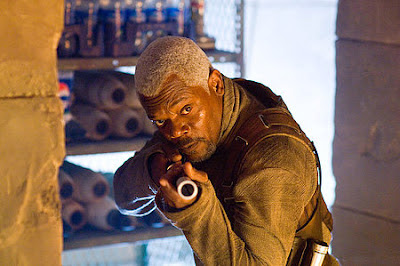 Director: Doug Liman
Starring: Hayden Christensen, Samuel L Jackson, Jamie Bell & Rachel Bilson.
A really great premise but, unfortunately, only an average film and an obvious set up for sequels.
Using the premise of someone finding he has the ability to teleport (jump) to anyhere in the world and then finding there are others like him and that they are fighting against a group out to exterminate them sounds like great material for an action/adventure film. And it would be...
... However, Jumper isn't quite that film but it wants to be and sometimes it does come close.
The 'jumping' itself looks cool and is a more subtle but effective special effect and the action sequences use this to great effect (one character 'jumping' a bus into the desert to throw at an enemy and a free fall drop/chase off the Empire State Building are highlights).
It is let down though by a few flaws.
The first is that the film is too short. Clocking at only 90 minutes it barely has time to explore any of the ideas before something else comes in. The film starts with an extended sequence featuring the main character, David, in his teens and first discovering he can teleport. Having grown up in an abusive household (at least we assume this, David's father is a drunk but at no time do we see any abuse) David uses this power to leave and start a new life, one that can give him complete freedom. We then jump to 8 years later and in the space of 48 hours David finds he is being hunted, reconnects with his childhood sweetheart, whisks her away to Rome, meets another Jumper, learns about the war and convinces the other Jumper that now is the time to go after their enemy's leader.... phew!
Given time to breathe, to get to know the characters and let them get to know eachother then the film could be great but its just too much in too little time and everything feels rushed with some scenes feeling short-changed. The film 'jumps' too erratically.
Because the film is driven by plot and action is suffers because the characters suffer. We learn very little about Sam Jackson's Roland, the man hunting Jumpers, or his motivations. A few lines here and there drop hints but aren't explored but luckilly Jackson still manages to make Roland menacing. Rachel Bilson's Missy seems far too trusting and accepts David's return and actions a little too easily and therefore is little more than a damsel in distress.
David himself (played by Star Wars' Hayden Christensen) suffers the most. His character comes across as lazy, spoilt, shallow, using his abilities for years just for fun and ignoring the opportunities to help others (seeing people trapped by floods on TV, he just changes the channel). His turn from brat to fighter feels forced and we see very little in his character to root for.
A highlight though is Jamie Bell as the roguish Griffin. A jumper who has been on the run all his life and has been taking the fight back to the enemy (named Paladins) whenever he can. Bell manages to steal most scenes that he's in.
The last flaw in the film is that the ending of the film falls flat. A big build up to the face off between David, Roland and Griffin fizzles out with the obvious set up for a sequel or even a series of sequels. When the director, Doug Liman, made The Bourne Identity, it felt like a complete film despite it later getting two sequels. With Jumper though it feels like Liman, or at least the studios, are just setting things up for bigger films later on.
I hope another film is made and that it develops the story and characters in more detail because if not, Jumper is just a cool looking action film with little heart.
Rating: 3/5
Posted by Dan at 13:40