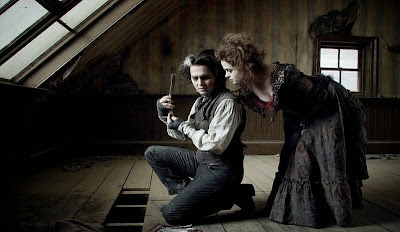 Director: Tim Burton
Starring: Johnny Depp, Helena Bonham Carter & Alan Rickman
A glorious, and gory, treat from the always excellent team of Burton and Depp. Only Tim Burton could mix a musical with gore and succeed. This was a real pleasure to watch.
The songs are great and delivered with skill and passion by Johnny Dep...(read more)p and Helena Bonham Carter while the plot, and certainly the gore, are like something out of an old Hammer Horror film (not surprising considering Burton is a Hammer fan and already made a film in tribute with Sleepy Hollow)!
Depp delivers another strong performance (especially vocally) though it feels a tad less developed than some of his earlier personas under Burton (Ed Wood being a personal fave). Still, he delivers the sad menace and hate at the heart of a man who believes he's lost everything and succumbs to revenge. Helena Bonham Carter also performs well and adds much sympathy to her role as the lovelorn Mrs Lovett who idolises Sweeney Todd despite her affections going unnoticed.
A few, purist, fans of the original musical might complain at the cutting of a few songs (the original musical being a 3+ hour affair), in addition to the, graphic, gore while horror fans might be shocked to see songs at all! But for everyone else who knows what to expect from the Burton/Depp team and for Burton fans in particular this is a joy.
Rating: 4/5
Posted by Dan at 13:40