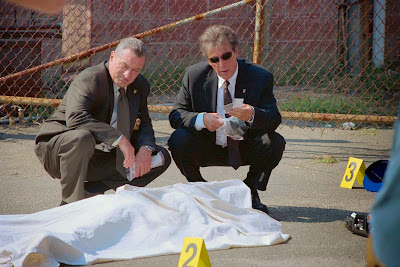 A fairly predictable, cop-thriller that stands out because of the opportunity to see two great actors, DeNiro and Pacino, work side by side on screen. However, while somewhat enjoyable, the experience does not quite live up the expectations.

In 1995, director Michael Mann made movie history with the crime thriller Heat, which was not only an excellent crime film, but boasted the first, shared, on screen appearances of Robert DeNiro and Al Pacino. DeNiro and Pacino, still considered to be two of the finest actors ever produced, received excellent reviews and after an already long wait to see them on screen together, audiences have been waiting for them to reunite again. In 2008, with Righteous Kill, audiences get that reunion only this time, while enjoyable, it doesn’t quite live up to expectations.

In an effort to come up with material worthy of starring both DeNiro and Pacino, Righteous Kill seems to try and be too clever for its own good. After the success of films like The Usual Suspects, Fight Club and The Sixth Sense in the 1990s, all films that had memorable twists in their endings, there have then been many imitators, most of which, sacrificed good stories and good characters for a big twist at the end and trying to capture the success of those films who began the trend. Righteous Kill broadcasts its intentions early on. With a, supposed, confession from one of its lead characters, Righteous Kill then proceeds to throw in additional suspects for the identity of a serial killer hunting criminals. In doing so, it undermines an otherwise interesting beginning that had potential to be a subtle character piece and builds it up for an expected twist that may, or may not come.

While the film takes a somewhat predictable course, there are still the performances of DeNiro and Pacino to enjoy and they are enjoyable. However, both DeNiro and Pacino have seen better days and neither has had the best record of quality films/performance post-Heat that they had pre-Heat. Both DeNiro and Pacino give decent performances in Righteous Kill and they are certainly enjoyable to watch working together onscreen but the flaws in the film’s script denies them the material with which to deliver a truly memorable performance though DeNiro certainly has more scenes and events to work with than Pacino. DeNiro and Pacino are also, ably, supported by John Leguizamo and Donnie Wahberg as fellow detectives, DeNiro’s love interest in the thrill seeking Carla Gugino and Brian Dennehy fills the stereotypical role of grizzled police captain with ease. The supporting roles are performed well enough without distracting from the central performances of DeNiro and Pacino which is the true attraction for audiences.

Overall, fans of DeNiro and Pacino should be happy, if under whelmed, by this second chance to see these two icons sharing screen time but it is a shame that the material is not worthy of either actor, even in their recent, less outstanding periods in their careers. A decent but disappointing thriller.