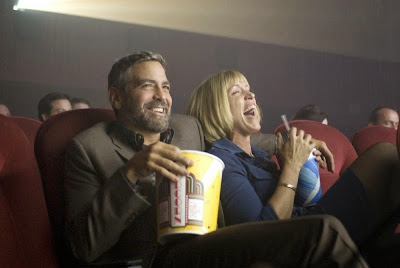 An entertaining, drama/comedy from the Coen Brothers which is enjoyable but less so than many previous efforts.

After the grim, gritty (and later to be award winning) crime drama of No Country For Old Men, it wasn’t too surprising to find the Coens following this up with something lighter as the Coens followed Blood Simple with Raising Arizona and Fargo with The Big Lebowski. This time around they’ve mixed drama and comedy again for a plot involving the CIA, lost documents, inter-marital affairs and internet dating whilst casting big Hollywood names like George Clooney and Brad Pitt into roles where intelligence rarely applies.

There is plenty to like about Burn After Reading. In true Coen style, the plot takes some unpredictable turns, mixes dark moments of humor and violence and features a strong cast delivering, generally, strong performances. The storyline’s central plot involve a fired CIA analyst (John Malkovich) and a copy of his memoirs that turns up in a local gym where two dim-witted employees (McDormand & Pitt) attempt to blackmail the analyst. Meanwhile, a treasury officer (Clooney) who is having an affair with the analyst’s wife also begins dating McDormand’s character. What occurs as a result is a mixture of mixed signals, paranoia, blackmail and murder. Additionally, as the big picture of what is occurring where and to whom, is seen by no one in particular, there are some amusing asides as we meet two CIA chiefs (lead by J.K. Simmons) trying to make sense of everything that occurs and failing (a sly stab at the actual Intelligence operations of the United States on the behalf of the Coens).

While there is much to enjoy, Burn After Reading also has its problems. For all its characters and the sometimes clever juggling of their storylines, Burn After Reading lacks an identifiable central character with which to root for. Is it Clooney’s womanizing treasury officer? McDormand’s slighty-dim if charming gym employee? Malkovich’s spurned analyst? Is it hard to really say, and with most of the characters bearing more unlikable traits that loveable ones, it is somewhat harder to root for any of them as you would have The Dude in The Big Lebowski or Everett in Oh Brother Where Art Thou?

The cast in Burn After Reading is impressive but also somewhat distracting at times. Clooney is entertaining but seems to have chosen to resurrect the same persona he used in Oh Brother Where Art Thou? and Intolerable Cruelty and, while it helps establish his character as a womanizer and sleaze, it also threatens to undermine some of the more dramatic scenes that occur later in the film. Pitt, too, is entertaining, letting loose as the gym trainer who lacks the mental stamina to match his physical training. Again, Pitt is entertaining but his status in Hollywood means his presence is often amusing but also distracts from the drama at times. More dependable are McDormand, Malkovich and Tilda Swinton (as the analyst’s ice queen wife) who are more well suited to the roles they perform while J.K. Simmons deadpan performance as a CIA chief is one of the film’s most enjoyable.