You Don't Mess With The Zohan 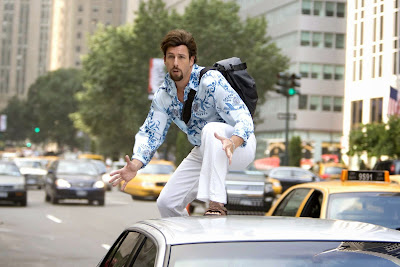 What starts off as a comedy version of Spielberg’s Munich by way of Austin Powers quickly loses steam early on resulting in Adam Sandler’s most inconsistent, and unsatisfying, film to date.

Adam Sandler is not an actor who is known for producing or starring in sophisticated comedies but he can sometimes deliver comedies that entertain beyond the usual toilet and sex humor that often dominate his films. The Wedding Singer, Big Daddy, Happy Gilmore; these are Sandler films that have included either sharp observational humor, genuine humanity or madcap lunacy to the standard Sandler template and succeeded in entertaining more than expected. You Don’t Mess With The Zohan, Sandler’s latest effort, starts out strong. Sandler plays Zohan, a top Mossad agent who, while fighting terrorists and seducing women, harbors a secret desire to become a hairdresser. Sandler makes Zohan the Israeli equivalent of Austin Powers while poking fun at dated Western influences in Israel (80s fashion and 90s Mariah Carey being shown current trends 10-20 years after their height of popularity in the US) and also adding some broad gags at Jewish culture from the region (a running gag throughout the film involves the various uses of Hummus).

However, Zohan wishes to escape to America to pursue his dream of becoming a hairdresser so, during a fight with his main rival Phantom (Turturro), Zohan fakes his death and flees to America. Once Zohan gets the opportunity to realize his dream, the story and the jokes begin to run out of steam. What starts as a mildly amusing gag involving Zohan’s ‘hands on’ hairdressing style and its popularity with his older female, grows less amusing as it, along with other running libido gags and appearances by Rob Schneider, become part of the limited running gags employed too frequently at the expense of fresher, more effective humor. The plot too, once Zohan gets his chance to cut hair, stumbles trying to justify its extended running time by throwing in a predictable love interest in Zohan’s boss and a sub-plot involving a greedy developer wanting to replace the community with shopping centers before Zohan’s enemy, Phantom, arrives to end Zohan’s life for good. The latter conflict improves the film towards its conclusion as old gags are dropped for more action and some, not too subtle, statements about the differences between the Arab/Israeli relationship in US communities but it does not quite make up for the overlong mid-section.

Performances in You Don’t Mess With The Zohan are a mixed bunch. Sandler’s performance as Zohan, while one-note, fulfills its purpose as the naïve, yet likeable hero while Turturro is entertaining as Zohan’s nemesis. Emmanuelle Chiriqui is wasted as little more than likeable boss/love interest and Rob Schneider merely annoys with yet another of his poorly performed supporting roles consisting little more than putting on a funny accent and spouting catchphrases.

Overall, You Don’t Mess With The Zohan is too long and disappoints too often to be more than mildly entertaining. It’s early energy and over-the-top action gives the film a strong start and there are some good jokes that hit their mark later but many don’t and the potential it had to be better is wasted resulting in a lower than average comedy.