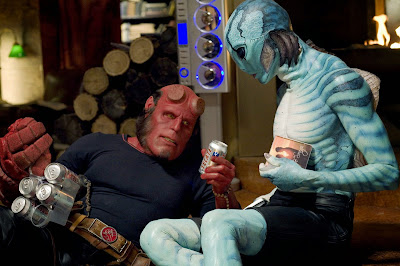 Hellboy returns, along with director Guillermo del Toro, for a sequel that improves on the original. However, what Hellboy II lacks in plot it more than makes up for on character and lush visual design.

It is satisfying to know that the first Hellboy film achieved enough success to warrant a sequel. The film, like its hero, always seemed like a harder sell for non-comicbook reading audiences to like. Unlike other superheroes or superhero films, its star is not human nor has any human alter-ego for when he isn’t battling the forces of evil. Hellboy is a freak, a demon and ugly but he also has charm and is certainly human in personality. It is this charm that helped win over readers and audiences to Hellboy. That and plenty of action and impressive visual design.

Much has changed this time around. The first film was a satisfying introduction to the character of Hellboy and his friends. However, while a good job was done to help audiences get to know Hellboy, the story demands of delivering an origin story in addition to a plot for Hellboy to foil meant we didn’t get to spend quite as much time getting to know Hellboy as we’d have liked. That changes with Hellboy II, as director Guillermo del Toro spends as much time getting to know and love Hellboy and his friends as he does advancing the plot. So good are the moments we spend with our cast between battles that the plot suffers somewhat as a result yet it will be the character moments you will remember most and talk about after the film has ended. Drunken escapades involving a musical interlude between Hellboy and his friend Abe are just one of the highlights in this regard as is a hilarious argument between Hellboy and new cast member Johan Krauss that results in a memorable, locker room, fight scene.

In addition to more personality and character development in Hellboy II, director Guillermo del Toro returns to the Hellboy franchise following the recent critical success of his fantasy film Pan’s Labyrinth. While Hellboy II won’t win over many of the intellectual crowd that praised Pan’s Labyrinth, it will certainly win over fans of del Toro’s visual style. Dealing with creatures of fairytale in the storyline of Hellboy II, del Toro builds a beautiful world of fantasy that co-exists alongside our own. Creatures such as the troll Mr. Wink and the menacing Tooth Fairies arrive fully realized like the twisted cousins of their Pan’s Labyrinth counterparts and more unique creations such as a Plant Elemental that attacks Hellboy in the film’s halfway point set-piece are as beautiful as they are dangerous. New locations are similarly well designed such as the Troll Market that is full of blink-and-you’ll-miss-it details and feels like the fantasy film equivalent of the Mos Eisley Cantina in Star Wars while an increased budget allows for Hellboy’s government headquarters to now bustle with life reminiscent of the headquarters of Men In Black.

What Hellboy II has in terms of strengths however, sometimes puts a spotlight on the film’s weaknesses such as its plot and villains. The storyline of on elfin prince wishing to regain control of his realm and wage war on the humans that have forced his people into hiding seems fine at first glance and the legendary ‘Golden Army’ which he intends to revive to accomplish this feat seem threatening enough, the manner in which this feat is achieved is fairly standard. To revive the Golden Army requires the collection of pieces of a crown and locating the home of the army, as such it is fairly predictable that some pieces fall into the hands of our heroes and they then need to prevent the prince, Nuada, from obtaining them. While this results in some impressive action sequences and special effects, the route the storyline will take is still somewhat predictable and the solution to stopping the ‘Golden Army’ in the finale is a little anti-climatic. Also, with such well-developed characters as Hellboy, Abe Sapien and Liz Sherman, the film’s villain, Prince Nuada, is underdeveloped and feels little more than a one-note villain. Luke Goss delivers a decent performance as Nuada, but given the lack of material to work with; his performance and his character still stand out as amongst the weakest in the film with even more personality given to the Tooth Fairies than to Nuada.

Overall, Hellboy II is still great entertainment. While its actual storyline is not much of an improvement over the first film’s, the attention to detail, the action and, most of all, the character development in Hellboy II not only improve upon that of the first film but also make’s up for Hellboy II’s own shortcomings. Hellboy II is well worth your time and enjoyment and while it might not achieve the critical or commercial success of other superhero films in 2008, it is certainly stands out as one of the most fun.