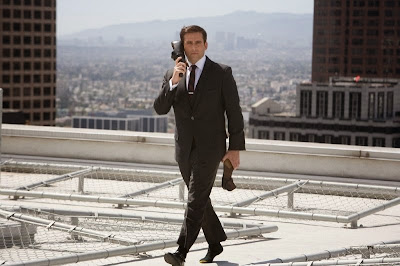 An entertaining comedy adapting the 60s Television series which also serves as a good vehicle for Steve Carell to demonstrate his comedy style.

Based on a 60s TV series starring Don Adams which regularly spoofed the conventions of the spy genre, Get Smart the film sometimes feel like it is late in arriving. Having already seen many 60s and 70s TV shows adapted for the big screen and coming years after the Austin Powers films had already spoofed the spy genre, Get Smart really shouldn’t be as entertaining as it is. Some of the gags involving gadgets and sophisticated covert operations seem plainly obvious while the film’s plot and its twists and turns likewise feel familiar and are somewhat predictable. However, what Get Smart does have is good casting.

Steve Carell, having been popular as the star of the US version of British TV Comedy The Office, is ideal as the choice to play Maxwell Smart, the earnest, if inexperienced Agent put out into the field for the first time after years working as an analyst. His inexperience and the mistakes it causes and even the solutions it brings work well with Carell’s nervous manner, especially as Carell chooses to avoid caricature by playing the role straight rather than consciously acknowledging the conventions of the spy or spoof genres when they present themselves. Performed somewhat seriously means Smart’s reactions to his situations feel fresh even if the situations and solutions themselves are not.

Carell is not the only smart casting choice in Get Smart. As fellow agents we have Dwayne ‘The Rock’ Johnson as the ultra-skilled Agent 23 who is both the perfect secret agent yet also a nice guy but is also, for most of the film, played seriously and therefore avoids becoming a spoof version of James Bond. In addition to Johnson, and the partner to Carrel’s Maxwell Smart, is Anne Hathaway as Agent 99 who manages to make her agent both confident and capable in skills yet vulnerable enough emotionally to be won over by Smart’s good nature and desire to prove himself. Alan Arkin also appears as Smart’s boss, a smart, likeable, if grumpy character whose deadpan delivery of his character’s seen-it-all weariness is yet another flavor of comedy that work well. The only slightly disappointing performance comes from Terence Stamp as leader of the villainous group CHAOS, whose performance, while not over-the-top, lacks any real depth.

While the casting is good, the plot is fairly standard and quite predictable but the action sequences are well paced with some above average CGI and helped by Carell’s performance and the film moves briskly from one action sequence to the next with many gags littered in between that you rarely have time to notice some of the plot holes or acknowledge the familiarity of some gags and scenes until much later. Get Smart’s story also benefits from fleshing out the characters of Smart and Agent 99 where lesser comedies would satisfy themselves with caricatures.

Overall, the lack of originality in some areas prevent Get Smart from being a great comedy but it is still entertaining thanks to a strong leading performance by Steve Carell and several smart casting choices in the supporting roles.