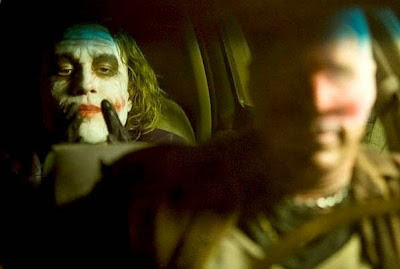 After a strong beginning for this new franchise in Batman Begins and following months to hype and expectation and even tragedies, The Dark Knight lives up to all expectations becoming a film that rewards on many levels.

To start, since it is what most people will be talking about, Heath Ledger is excellent as The Joker! It is an excellent performance and it is certainly Oscar-worthy (Oscar winning though? I guess we will see. We still have the rest of the year to go). After well received early footage of his performance and following his unfortunate death, this is a performance that Ledger will be remembered fondly for.

I am not sure it is Ledger's best performance (some people panned it, but his performance in Brokeback Mountain was incredibly strong and full of nuance) and, while his Joker dominates the screen when he's on it, Aaron Eckhart's performance as Harvey Dent is the film’s strongest performance (helped by his character having an arc to follow where The Joker is a straight villain, though a thrilling one). Ledger's Joker is twisted, mean and funny, full of little nervous ticks. I am a big fan of Jack Nicholson, but this is the best live-action performance I’ve seen of The Joker. It will be hard to accept anyone else in the role if they bring the character back for future installments.

As for the rest of the film, there is much to recommend. Never trying to dumb things down as some blockbusters do, Nolan delivers a gritty, intelligent crime film. It has been said that The Dark Knight is almost a superhero equivalent of Michael Mann's Heat and I think I have to agree. The multiple characters and sub-plots and the decisions characters have to make and whether their choices will force them to change their principles is deftly handled and weaves together satisfyingly. Christian Bale’s Batman/Bruce Wayne isn't sidelined to focus on the villains and gets plenty of drama. Michael Caine is great as usual as Alfred. Gary Oldman delivers a strong performance and his character Gordon is perhaps a bigger hero than Dent (remaining less likely to be corrupted) and Maggie Gyllenhaal makes me wish they'd cast her in the role of Rachel all along bringing added humanity to her role.

Aaron Eckhart, however, delivers the best performance. Eckhart always been a good actor though had yet to have any material to really challenge him and allow him to live up to his potential but he gets the chance to do so here. Harvey Dent has always been a tragic character and Eckhart manages to make Dent a character we really care about, we hate what he becomes without hating him for becoming it. In a film with Bale as Batman and Ledger dominating the screen as The Joker, that Eckhart can hold his own in the film and make an even stronger impression is very impressive. He deserves as much attention as Ledger though will likely be overlooked come Oscar season.

There are some, minor, complaints about The Dark Knight that sometimes distract. The Batman costume suit still looks bad early on in the film (I hadn't been keen on the look of the suit in Batman Begins) but the improvements made later are an improvement and the amount of advanced technology used by Batman was somewhat excessive. The sonar/surveillance system was a step too far eventhough it perhaps made a statement about the appropriate use of surveillance technology. There were a few sub-plots that didn't seem to be going anywhere until much later (the accountant for instance was one sub-plot was distracting and took too long in revealing its relevance to the overall plot). Also, while Maggie Gyllenhaal is good as Rachel Dawes, her character is over shadowed by many other characters. These are minor issues and this is still a near perfect film superhero film.

Overall, The Dark Knight has raised the standard of quality for superhero films like its predecessor, Batman Begins, had done before it. The story, pacing, characters and action are all very strong. I do believe that the standard set here will make it difficult for a third film to equal or surpass The Dark Knight in quality but if Nolan returns to direct then anything is possible. A fantastic film and the best blockbuster film of 2008.