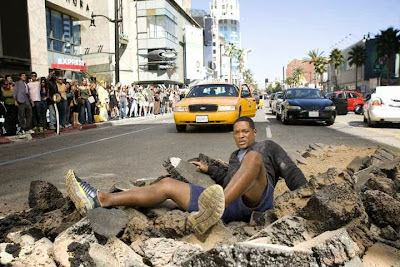 Will Smith turns in another audience pleasing performance in this promising superhero action/comedy.

Superheroes are big business in Hollywood and so is Will Smith so it seems only natural to pair the two to produce a summer blockbuster. The result is Hancock which is an entertaining blockbuster even though it does not quite live up to its potential. Hancock is a superhero film that begins with a lot of promise and several smart choices. The first smart choice is that, instead of adapting an established superhero franchise for Will Smith, they create an original hero with his own back story and motivations. The next smart choice was to make this new hero a jerk.

Hancock is a drunk and a nasty drunk at that. When he does choose to use his powers to help, then he does so with little care or effort leaving damage in his wake and he is labeled less of a hero, more of a menace. Hancock is most enjoyable when its lead character is less likeable, the end results of his attempts at heroism being as humorous as the kind of stunts seen on internet sites like Youtube (in fact it is mentioned that many of Hancock’s rescues end up on Youtube including an incident where Hancock saves a beached whale by flinging it into the ocean). Will Smith also relishes in the opportunity to deliver some hilarious and acerbic insults at the many members of the public who choose to criticize him for his failures.

Hancock’s life and attitude starts to change though after he rescues a well-intentioned public relations specialist Ray (Bateman). Stopping a train, while causing a mile long pile-up, to save Ray results in another round of complaints, but Ray who is grateful that Hancock has saved his life offers to do Hancock a favor and work on improving his image to the public. Not used to such kindness, Hancock struggles with how to react and while the gags still continue, an injection of drama into the plot helps make Hancock more rewarding. Getting glimpses into Hancock’s past helps provide insight into his character and the mystery surrounding Hancock’s origins are more interesting at this point when neither Hancock, or the audience, have answers to the mystery. Claiming to have awoken in a hospital 80 years ago, with no memory but equipped with super-powers, we find Hancock is a man alone. Unable to find others like him and unable to remember his past, he has become a loner and one who hates himself (saying no one ever came looking for him when he awoke in the hospital and wondering what kind of person he must have been to be abandoned like that).

Ray manages to convince Hancock to serve time in prison for the property damage he has caused by his heroism insisting that by doing so, he is showing the people he is willing to change and be a better hero while making the public miss him when crime begins to escalate in his absence. When Hancock is called upon for help at last it is to an excellent action sequence which also mixes some well placed humor at the expense of the superhero genre (Hancock having to wear a superhero costume whilst offering words of support to police officers in the nervous manner of someone unaccustomed to doing so before). It is, however, shortly after this scene that the film takes a turn towards a less original, more standard superhero direction. A big plot twist involving Ray’s wife and her attitude towards Hancock (built up during the first half) seems unbelievable (even for a film about a man that can fly) despite a few obvious hints earlier in the film, and had already been revealed in the trailers for Hancock prior to the film’s release. From here the comedy is sacrificed for an explanation of Hancock’s origins which is less interesting than the mystery surrounding them suggests and the final third of the film becomes fairly standard melodrama and action, though the action sequences still look good and entertain.

Despite a less interesting second half, Hancock is still an entertaining film overall and this is also due to a trio of enjoyable performances. Will Smith, as mentioned before, relishes in the chance to play a hero, whether it be the boozy foul mouthed version at the beginning of the film or self-sacrificing hero of the second half. Smith delivers the kind of wise-cracking performance he is often loved for. Supporting him is Jason Bateman who’s even more capable than Smith at delivering a witty one liner (as evidenced in his TV series Arrested Development) and is also able to make Ray an incredibly likeable, and believable, nice guy who is, perhaps, the real hero of the film. Finally we have Charlize Theron. Theron playing Ray’s wife reveals there is much more to her character, and her reason for being cast in the role, at the film’s halfway point and despite the contrivances in her character and the plot from this point, Theron handles the character’s personality well.

Overall, while slightly disappointing and predictable at the end, Hancock remains and enjoyable film with plenty of comedy, some intriguing drama, enjoyable action and solid performances by the cast throughout. You will come away wanting more but, as with all superhero films; there will no doubt be more Hancock on the big screen to come.