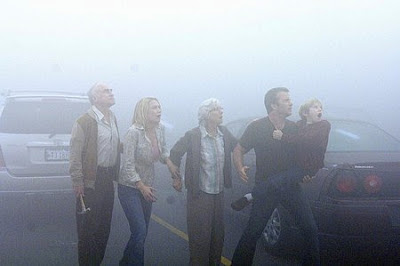 In 1994, when Frank Darabont adapted a short, non-horror, Stephen King story The Shawshank Redemption, it gained positive reviews but made little money at the box office. However, on video, the film became a big hit and has since become one of the most critically acclaimed films of all time, constantly appearing in the Top 5 of Top 100 Greatest Films lists. Darabont followed this up with another critically acclaimed prison drama called The Green Mile, also adapted from a Stephen King tale. Then Darabont made The Majestic. No Stephen King adaptation this time, and though not a bad film, it neither made money nor achieved any critical success that even closely approached Darabont’s earlier films. Darabont has now chosen, with The Mist, to return to adapting Stephen King. However, with no more prison dramas or similar to adapt, Darabont has adapted one of King’s horror stories and, in doing so, puts his film up to comparison against, not only Darabont’s own earlier adaptations, but also against the huge number of Stephen King horrors already adapted into films and for television. The result is a film, while good, suffers somewhat from early entries into the Stephen King genre and from other horror films in general.

Frank Darabont’s strengths are in characters, developing them and in getting strong performances from the actors cast to play them. Darabont succeeds in that regard here by again casting character actors rather than big names. Thomas Jane delivers a solid performance as David Drayton, an artist and father who just wants to protect his child when a strange mist envelops a small town, a mist containing unseen creatures that pick anyone left stranded in the mist. In support the are strong performances from Tony Jones (Infamous) as a supermarket worker who struggles to overcome his fears, Andre Braugher (Homicide: Life on the Street) as Drayton’s brash neighbor and Marcia Gay Harden, usually known for playing dutiful wives but her playing the town’s religious fanatic, a cold and manipulative individual.

In addition to the performances, Darabont is effective in creating a mood of dread. As the mist descends on the town, a group of survivors barricade themselves inside a supermarket. Initially they fear the mist to be some chemical or gas but soon coming to realize its danger is darker than they imagined. Mostly unable to see what lie within the mist and with only glimpses of the dangers, most of the danger and fear in early scenes is achieved through sound and sometimes the absence of it. A sense of dread is effectively built up; exploiting old fears of things you can’t see in the dark to produce chills. It is a method of achieving scares that is rarely seen in current cinema which relies frequently on gore.
However, when attacks do come and creatures are seen more clearly, it lacks the impact of scenes where we could see very little. Some of this is due to CGI. While not exactly poor, it stands out especially when CGI comes into contact with actual actors. Darabont is not a director experienced in using CGI and sometimes it appears obvious that his actors are reacting to things that aren’t there, the use of CGI often not meshing well with the live action. One type of creature in the mist, a type of spider, is more effective seen in short glimpses and in the shadows than once fully revealed.

The film’s finale however is one that has impact. Foregoing the enigmatic ending of King’s original story, and opting against a happy mainstream ending, Darabont goes for something altogether bleaker. It might upset audiences but it does not go where you expect and that helps set it apart from many other horrors, going for emotional impact rather cheap scares.

Overall though, there are better Stephen King adaptations, better horrors and certainly better Frank Darabont films. While there is plenty to recommend this film, the ineffective use of CGI and its effect on the film’s atmosphere undermines some of the film’s better qualities making it feel as though The Mist might have been better served as a mini series for television than on the big screen.