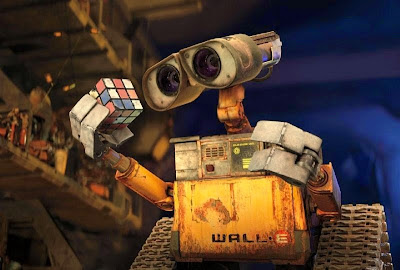 Pixar’s latest animated feature is not only its most daring film to date but is also it’s most charming and entertaining since Toy Story.

Having revitalized and revolutionized the animated film industry in 1995 when they released Toy Story, Pixar Animation Studios (under the Disney umbrella) have consistently lead the pack ever since in not only pushing the boundaries of what can be accomplished with computer animation but also delivering the finest in story and characters. Being so critically and commercially successful might lead other companies to become too comfortable in their success, stick to a winning formula and just rake in the rewards but not Pixar. Forever wanting to experiment and find new ways to tell stories, WALL-E is their riskiest film to date and also their most charming in years.

It is hard to imagine another studio producing a film that barely has any dialogue and starring a robot that communicates mostly in a series of beeps and half-formed, computer garbled words. Not only does Pixar do this, they make it work and for his lack of speech and human features, the robot WALL-E (pronounced Wally) is more human than you might believe. Set in the far future, Earth has been abandoned and is now uninhabitable due to rubbish and pollution. While the humans are away, they have left robots to clean up after them and WALL-E is the last. Years alone (the ‘bodies’ of old, defunct roots occasionally seen strewn amongst the waste piles), WALL-E has developed a personality of his own. Going about his duty everyday, he collects random items of interest for his collection suggesting that even the things we throw away are of use to someone else. His only company is a cockroach (who has his own running gag throughout the film of being ‘un-killable’), WALL-E longs for company spending his time watching and old VHS copy of the film Hello, Dolly! and looking for love.

Company then arrives. A ship landing nearby leaves a shiny new robot named EVE to scan the planet for proof that the planet can support life again. Initially uninterested in the lonely WALL-E, his persistence forms a bond between the two until life is found (a plant WALL-E discovered) and EVE goes into standby mode to await retrieval. WALL-E’s attempts to revive her are touching and his commitment to protecting EVE while showing EVE his world in spite of her being unable to respond are incredibly touching and more romantic than many a live-action human romance. So full of personally is this little computer-generated robot, we find ourselves rooting for him when EVE is taken back into space with WALL-E hitch-hiking along to protect her.

Once in space, and with our star firmly established, the plot speeds up. WALL-E finds himself on a ship where the last of the human race reside, only now they have become fat and lazy, living their lives in floating chairs with their attention barely shifting away from the television/computer screen hovering in front of them. With the human race’s condition and a living environment that is a monument to big industries taking over all aspects of our lives, the messages in the film are very clear. It is, perhaps, a little disappointing considering how clever the characterization of our robot cast, that the messages of waste and consumerism being harmful to society are so blatant but they do work so it is a minor complaint at best. Another minor complaint is that the human characters introduced at this stage are less interesting than our robot cast but again they serve a purpose and send a more subtle message than the humans have become such a lazy, uninvolved, ‘robotic’ society that the actual robots have more individuality than the humans.

WALL-E becomes an unlikely hero, his personality rubbing off on everyone and everything around him (distracting humans from their screens to look at the world, distracting robots from their daily tasks to wave and have them realize they can do more than what they are programmed to do). Along with EVE, the human captain of the ship and a ragtag bunch of malfunctioning robots, WALL-E becomes a savior of the human race in a frantic race to the finish that still manages to fit in plenty of charming moments and the slapstick comedy that Pixar is well-known for (WALL-E himself is a Charlie Chaplin-esque figure).

Overall, WALL-E is a great character and a great film. Pixar’s risk taking pays off. The film is funny, dramatic and manages to make you care about a computer animated robot as much as you could care about another human being. The film might occasionally stray from being fun and clever to just being fun but that is hardly a major criticism. WALL-E will win over adults and children alike and has raised the bar for quality higher, not just for Pixar, but for all-ages animation and storytelling.