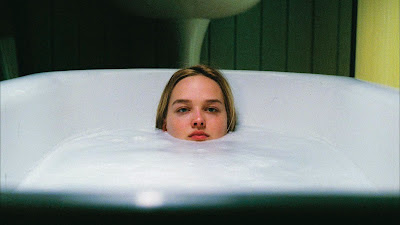 A unique and brave idea results in some effective shocks but the execution does not always live up to the potential of its premise.

Destined to become a cult horror based purely on its subject matter alone, Teeth deals with the Vagina Dentata myth as teenage Christian Dawn (Jess Weixler) finds she has more than just religious reasons to maintain her virginity but also finds that her condition to have the potential to be empowering. It’s a tricky subject matter and one that is certainly more likely to prey on male fears than female which makes Teeth stand out from other horrors where women are usually the victim.

What follows is a film that is often chilling although its low budget production sometimes proves to be as much a hindrance to the film’s tone as it helps. The film starts off with a cute opening scene with Dawn and her bullying step brother, Brad as children in a paddling pool. Playing a variation of “I’ll show you mine”, it proceeds to Brad receiving a minor injury that not only hints at the type of individual Brad will become later in life but also at Dawn’s condition. Moving on to the present day and Dawn is now a leading member of her school’s chastity group. Her role allows her condition to go, believably, undiscovered from childhood and her conservative beliefs allow Dawn herself to live her life unaware that she is different than other girls. Her beliefs also mean she has reason to fear sex, at least before marriage, so when a fellow group member romances her and later proceeds to pressure into sex, the result is horrifying as Dawn and her attacker discover she has teeth where none should be. The horror is effectively conveyed and uses some graphic, yet effective, effects to render the gore and this attacks remains shocking afterwards when Dawn goes to see a gynecologist about her condition with predictable, but no less effective, results.

After the halfway point though the film begins to falter. Unsure about its direction or just unsure on how to get to its destination, the plot begins to wander as Dawn is presented with more occasions with which to risk sex and horror. At this point it seems clear that are limited ways in which to use her condition and the introduction of some black humor regarding her situation has limited success and while it seems obvious that a confrontation with her step brother has been due since the film’s opening scene, the climax of that particular sub-plot is somewhat dullened by previous scenes. There is also a very uneven musical score in the film that rarely manages to set a strong tone in the scenes where it is used and sometimes feels reminiscent of low budget TV drama.

Overall, thanks to some effective horror in the first hour, and a strong performance by Jess Weixler as Dawn conveying her early innocence and fears as they become strengths effectively, Teeth is still an above average horror and succeeds in its role as a cautionary tale. It does falter somewhat in its later scenes and occasionally in its execution but it is still an interesting film and worth seeing for its attempts to add something new to the horror genre.