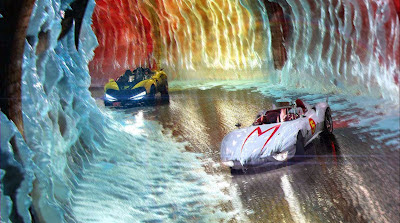 A stylish, if shallow, live action adaptation of the 1960s Japanese Anime.

First off, the Wachowskis (creators of The Matrix films), have done impressive work bringing the 2D Japanese Anime series Speed Racer to life as a 3D, live action and CGI universe. All bright neon lights and futuristic design, Speed Racer is likely to amaze younger viewers and should impress more discerning adult viewers. And, while clearly CGI, you are able to suspend disbelief and revel in a cartoon come to life. Unfortunately, the directors have not put quite as much effort into the characters or their story as they had in creating their world.

While Speed Racer is based on a popular children’s cartoon and is, therefore, a film whose target audience will mainly be children and older fans of the same cartoon, it still feels as though the storyline is thin and the characters two-dimensional (ironic since this film adapts a 2D series into 3D for film). Many other family films are capable of looking good and delivering a decent story, Pixar for example, but the Wachowski’s have chosen to focus purely on the racing aspect of the cartoon and builds a story around them. Speed Racer, middle son of the Racer family, has always wanted to race. His father builds race cars and his older brother drove them, until his death. Speed just wants to race like his brother did but, when he turns down an offer of racing for a greedy racing corporation; Speed finds his career at risk and must race to prove that corporations don’t control racing, him or his family. So far, so good but the delivery comes over rather too simplistically, corporations are bad, the little guy is good and try your hardest and you can win.

Characters are similarly simplified and the casting suffers for it. Susan Sarandon has little to do as the supportive mother, Christina Ricci is the spunky girlfriend but takes a second place to racing in Speed’s heart though the effect this might have on their relationship is not explored, Roger Allam is so OTT as the villainous business man Royalton that it’s hard to believe anyone is surprised when his nature is exposed to the world and Paulie Litt perfects the role of annoying little brother in that his presence distracts scenes away from more important characters and events. Emile Hirsch, an up and coming talent, plays the lead role of Speed Racer, and while usually a strong performer instead feels quite bland and wooden here. A lot of the problems with the characters lie, not with the cast, but with the directors who rely too much on clichéd dialogue which might be faithful to the cartoon on which it is based, but does not give any of the characters any real depth or insight.

The Wachowski’s also make miss-steps in the first half of the film in regards to pacing. For a film called Speed Racer, about racing and starring a character called Speed Racer, it seems odd that the opening races in the film suffer constant interruptions to show flashbacks of the characters and how they came to be where they are in the present. The races lack the feeling of adrenaline present in other racing films or even action films and a main racing sequence in the middle of the film stops for a break half way through just as it starts to impress, although the middle racing sequence still feels a little too similar to the Pod Race from Star Wars: Episode One. It’s not until the final race that the audience gets to see a race that truly impresses and when it comes it is a sequence that will take your breath away.

Overall, while the film looks great, as some decent racing/action sequences and ends quite strong, the underdeveloped characters and story does not live up to the visuals and the films struggles too much to get moving in the first half that it’s final shot of energy feels too little too late and no family film, especially one about racing, should clock in at over two hours in length. So, Speed Racer is a film with style, but little substance.