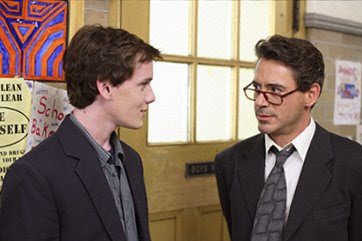 A mildly amusing comedy that has some good moments but is ultimately less than the sum of its part.

There is some uncertainty surrounding Charlie Bartlett. There seems to some confusion over who Charlie Bartlett is and, as such, it leaves the film feeling somewhat uneven. As the film begins, we have a scene where Bartlett is being expelled from his private school for producing and selling illegal IDs. This rebellious act and that he has also been expelled from several other private schools prior to this, gives an impression that Bartlett is more rebellious than he later appears to be. When Bartlett is then forced to attend a public school as a result, the potential is set up for an enjoyable and, perhaps, thought provoking comedy but is, instead, something much more mild mannered.

Bartlett arrives at public school and promptly discovers his intellect is not as winning with the student body here as he believed it might be and finds there are troublemakers far worse than he. Wanting to be popular, Bartlett exploits his intellectual image and his access to prescription medication through various psychiatrists to become his school’s drug dealer. His motives and methods to become popular, along with his background make Bartlett a difficult lead to like. It does not help that aspects of his character bear similarities to other, more successful, films. An intellectual standing out from the rest of his classmates? Sounds like Rushmore. Access to various avenues of psychoanalysis, whilst having an eccentric family background? Igby Goes Down. Rebelling against the school principal whilst dating his daughter? Too many films to name.

The film that Charlie Bartlett most seems to imitate however is Risky Business, the 1983 comedy that set Tom Cruise on his road to stardom. Where Cruise’s character Joel, was a rich kid who rebels and starts his own prostitution racket, Bartlett rebels against his school by dealing drugs. In one scene, Bartlett parades around in his underwear, wearing sunglasses and randomly singing. Remind you of a scene from Risky Business?

Charlie Bartlett also does not appear to say anything original or risk straying outside of its comfort zone. Bartlett’s relationships with his mother, his girlfriend and the principal seem to wrap up too easily when the consequences of his actions are realized. The suicide attempt of a student overdosing on Bartlett’s drugs and the rising alcoholism of his principal all solve themselves in the end without any major lessons learned for Bartlett.

Performance-wise, Yelchin is watchable as Bartlett but his inexperience as a lead actor shows and some scenes (like when Bartlett trips out on Ritalin) come over as forced and the overall mild mannered nature of his performance makes it difficult to believe that Bartlett is capable of gaining the popularity and respect of the students that he receives. Hope Davis offers a decent performance as Bartlett’s mother but her performance here suffers slightly in comparison to similar roles in the past. The one stand out performance in the film is Robert Downey Jr as the school’s principal. His principal is a man trying to run a school when he’d rather be teaching instead while also having to raise a daughter alone and struggling with alcoholism is response to the stress he feels. Downey Jr’s principal then finds Bartlett to be a major obstacle preventing him from managing what is, already, a difficult set of responsibilities. Robert Downey Jr actually delivers such a strong performance the film suffers whenever he is off screen and his character feels more interesting and sympathetic than Bartlett himself.

Overall, Charlie Bartlett is a decent film with a good performance from Robert Downey Jr. While it has some good moments though, it owes too much too other films that have covered similar grounds and suffers to add anything worthwhile in comparison. Charlie Bartlett is a rebel, just not a memorable one.