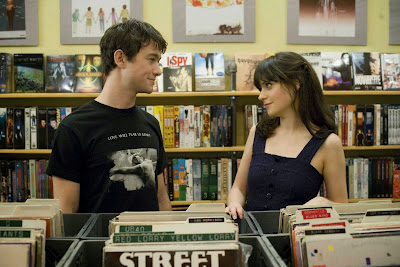 A highly enjoyable and inventive comedy that should appeal to the romantic in people and in particular to anyone that has ever thought they’d found the partner they were looking for only to have it taken away. Sad, funny yet also heart-warming.

A personal project for all involved from screenwriters Neustadter and Weber, director Webb and even its star Gordon-Levitt, (500) Days of Summer offers a very different approach to romantic comedies that has been seen in recent and offers more emotional truth than most romantic comedies usually accomplish dealing with love and break ups, the fantasy and reality of relationships. The result is a film that is not only fun and very enjoyable but also quite sad and poignant and has appeal that should attract even male audiences to what is, usually, a female audience targeted genre.

Tom (Gordon-Levitt) is an idealistic and aspiring architect stuck in a job writing greeting cards for several years. Tom’s belief that his life will improve immensely when he eventually meets ‘The One’, the woman whom will be the love of his life, seems fulfilled when he meets his boss’ new assistant Summer (Deschanel) who’s personality and shared fondness for The Smiths songs convinces Tom that she is the girl he has been waiting for. Unfortunately Summer is less idealistic about love and relationships and when a romance does begin between her and Tom, it is one that does not go as Tom had always imagined it would.

(500) Days of Summer is a film that engages on several levels. The film’s structure, starting at day 488 before flipping back to the start at day one when Tom and Summer first meet then proceeded to jump back and forth across the timeline of their relationship, is very interesting decision allowing the audience to the various moments in the development and breakdown of a romance that at times feels saddening when placed side by side whilst at other moments generating humour without damaging the emotions portrayed within either scenes. Also, whilst the ending of the relationship might seem a foregone conclusion, there are many surprises in store in regards to the sequence of events. Using various different styles to represent the various emotions experienced by Tom throughout the relationship visually, we get an upbeat musical number complete with choreographed dance sequences and animation in one scene where everything seems good for Tom and in a later scene where Tom sees his hopes of a future rekindled to be dashed again there is an effective use of split screen to allow audiences to see Tom’s dreams for an evening play simultaneously against the actual events that do occur. Rather than then be a series of inventive gimmicks just there to entertain, these moments actually serve the story and the emotions experienced throughout. Tom is a very engaging character and one that will appear to male audiences as much as female amongst those that have experiences joys and heartbreak in the pursuit of romance. Despite the obstacles Tom faces and the destination his relationship with Summer will reach, he remains a very likeable character whose optimism is very endearing yet is also recognisably flawed as his idealism is certainly portrayed as naïve, even unrealistic when necessary.

Leading the film, Joseph Gordon-Levitt puts in a very watchable, loveable performance as Tom. Even when he makes mistakes you find yourself rooting for him to succeed and Gordon-Levitt effectively balances Tom’s happiness with his heartbreak in a manner that feels emotionally truthful whilst clearly having a lot of fun after a series of serious, yet also impressive, film roles. Zooey Deschanel is charming as Summer and though her role is dictated mostly by Tom’s impressions of her character, Deschanel is able to layer her performance both shows the qualities that make her appealing to Tom whilst also displaying the flaws that will lead to their differences for the audience to see even though Tom initially does not. Chloe Moretz is likeable as the almost too-cute and too-wise younger sister of Tom while Geoffrey Arend and Matthew Gray Gubler are also likeable as Tom’s friends McKenzie and Paul.

Incredibly likeable yet tinged with sadness, (500) Days of Summer is a romantic comedy that is bittersweet. Inventive in its structure and in its use of various visual styles to tell its story, the story itself and the characters and performances within, particularly Gordon-Levitt as Tom, makes this a very enjoyable and memorable film. (500) Days of Summer offers an alternative type of romantic comedy that remains heart-warming but feels more truthful, original and has appeal for male and female audiences. Excellent!