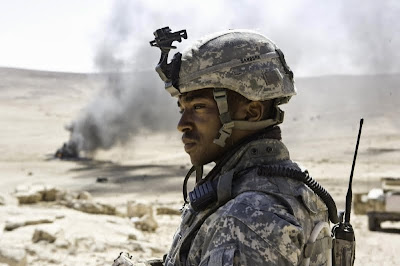 A taut and effective war-time thriller that wisely abandons most of the political overtones that have driven other war films addressing the military actions in the Middle East and focusing on the effect the war has on those troops entrenched in the actual warfare itself.

With many films having been made post 9/11 and after the start of the US led military campaigns in Iraq and Afghanistan, most films have chosen to focus on the politics that have led to such campaigns and that drive them or have, instead, focused on the emotional aftermath to both the soldiers involved in the campaigns, ala 1980s The Deer Hunter, and upon the lives of the indigent populations of the countries involved. Where The Hurt Locker differs from such films is that it almost ignore the politics of the situation altogether instead diving straight into the action following the lives of three soldiers, bomb disposal experts, fight in Iraq and showing the day to day dangers and tensions that they face. Directed by Kathryn Bigelow, a director known for examining the male psyche through action thrillers such as Point Break or living in male dominated professions such as Blue Steel, she is an ideal choice for directing The Hurt Locker and the result is a very tense film that feels surprisingly honest in its depiction of the experiences of its characters.

Having lost their previous sergeant to an explosive device that was detonated before they could disarm it, Sanborn (Mackie) and Eldridge (Geraghty) are dealing with the loss and with the very real prospects that they too could die before their tour of duty ends. When their new sergeant arrives, the risk-taking, cocky James (Renner) the tension in Sanborn and Eldridge’s already stressed lives is driven higher.

Whilst light in actual plot, going almost from one bomb disposal scene to the next with the stakes rising higher with each undertaking, and also light on heavy handed undertaking (little philosophising is made by the three lead characters and few glimpses given of their lives pre-Iraq), it could be easy to dismiss The Hurt Locker on a cursory glance as being a war-time action film with little added depth. However, Bigelow instead choosing to represent her character’s day to day lives under pressure without the added commentary adds an extra layer of authenticity to the events portrayed along with the handheld camera/cinema verite style of cinematography meaning there are many occasions where you feel drawn into the action. It also helps that there are several gripping scenes of tension when the characters are called upon to disarm a bomb. The tension of the situation, of disarming an explosive device without activating it, is heightened by the location being Iraq and the added danger of insurgents being present to attack any soldiers who attempt to disarm their devices. The very real feelings of paranoia that might occur within a soldier’s life in those situations is brought to the fore as the camera often glances quickly from one face in the crowd to the next, where any person could be a potential insurgent waiting to strike.

The Hurt Locker also features some very satisfying casting. In addition to Guy Pearce, Ralph Fiennes and David Morse appearing in smaller, supporting roles, the film rests mostly upon its three leads. Each of the three roles and performances seem to embody different reactions to war. Anthony Mackie gives a good performance as Sanborn, the soldier for whom the things he has faced has made him weary and frustrated. Brian Geraghty is suitably nervous as the Eldridge, the soldier who is growing increasingly fearful over his chances of survival after witnessing the loss of fellow soldiers and for whom the attitudes and actions of Renner’s James serves to heighten. The most memorable performance though is Renner as the reckless new sergeant James, whose cocksure attitude reveals a personality addicted to the adrenalin that being in such high stakes situations that his job role provides, satisfies. The Hurt Locker begins with a quote stating that for some “War is a drug” and in James, this can be seen and understood as James finds a thrill and a meaning to his life in protecting his fellow soldiers that his life back in America could not fulfil.

Overall, The Hurt Locker is an impressive film with many gripping scenes filled with suspense and some impressive and naturalistic performances from its three main leads. It may not provide audiences with explicit answers as to what drives soldiers living in such situations and sometimes does feel somewhat gung-ho in the presentation of their heroics but the film offers enough understanding to feel what they feel and that adds to the tension. Impressive.