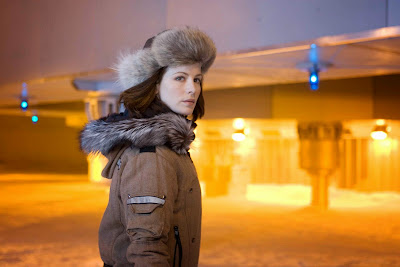 An average thriller which fails to adequately adapt its far superior source material for the big screen, but still manage to be serviceable.

Beginning life as a comic book mini-series written by Greg Rucka, Whiteout was initially well received spawning a sequel mini-series before being optioned to studios to be adapted for film. The production of the film itself however, has been long with news that the film had been completed a year before it has finally been released and the results may make the reasons seem clear. Whilst keeping the basic plot elements and characters from the comic books, Whiteout the film is merely average seemingly excising some of the better material and suffering from some stereotypical directing approaches when adapting this series as a big screen thriller.

At a research base in Antarctica, when the temperatures and weather conditions can kill and unprepared, unprotected human being in minutes, Marshall Carrie Stetko (Beckinsale) finds herself charged with solving a murder that has occurred on the eve of the camp’s holiday evacuation with a massive snowstorm on approach. The murder being the first to ever occur on Antarctica also brings in the help of U.N. Agent Pryce (Macht) and a mission to find the killer and uncover the reasons for the killing, which may relate to lost Russian plane that crashed in the area decades before, and do so before the storm’s approach strands all involved at the station for the winter.

Given how strong the original source material is and how uncomplicated its plot, yet strong in its tension, it is surprising how empty Whiteout the film feels in comparison. Several directorial choices in adapting the material for the big screen leaves the finished film feeling somewhat lacking in emotion with several attempts to force emotion instead with an overly dramatic, and intrusive musical score to remind audiences that a scene should be tense, or sad rather than allow the action to speak for itself. Dominic Sena also, unwisely, chooses to fill us in on Carrie Stetko’s history and reasons for being stationed at Antarctica through a series of flashbacks which, on film, are frequently jarring and fail to add much tension or feeling to Stetko’s past and it’s relation to the present. Whilst the Antarctic landscapes are beautiful to behold and the realisation of the conditions of moving through a snowstorm effectively realised, particularly during the film’s climax, there is often the sense that the film looks better than it should with some CGI use, particular during the film’s prologue, standing out and distracting from a film that feels as though it would be better served filmed on a lower budget. Occasionally tense, Whiteout the film is merely the bones of its source material fitted to match a checklist of standard thriller expectations including a forced attempt at some romantic tension between Stetko and Pryce but is not as intense or as emotionally involving as it could have been.

Kate Beckinsale is certainly decent as Carrie Stetko, demonstrating a little more life emotionally than the recent series of Underworld action films in which she has been starring, but her performances is only satisfactory rather than exemplary. Macht is also satisfactory as Pryce but his performance and character have little depth and are fairly unmemorable. Tom Skerritt gives the film its most memorable role, unsurprising given the actor’s considerable experience, giving his character Doc. Fury a likeable amount of aged wisdom.

Overall, Whiteout is too by-the-numbers to be more than a merely satisfactory thriller which is very disappointing considering the strength of the comic book on which the film is based. The film’s setting is effectively realised and the film does possess some tense sequences but it mostly forgettable and certainly disappointing to any audience that is familiar with the original comics. Disappointing.